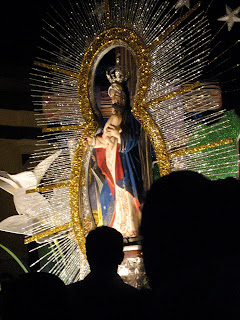 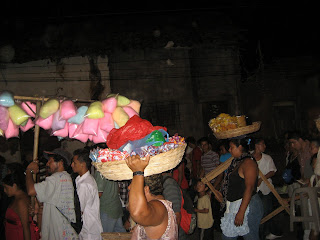 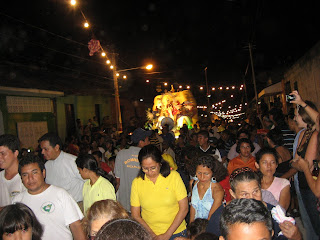 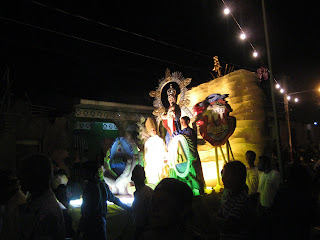 I’ve spent the last couple of days looking for her, tracking her by the sound of firecrackers going off. I heard her leave again this morning at 5 am actually, I think it was just the start of the mass and she left a few hours later. When I went running, I looked for her at the little stage at the end of Calzada, the street she will be traveling through tonight. She wasn’t there yet. Later, I heard firecrackers in the street and she was passing down Libertad. I went out to watch, she was being wheeled on a cart with a small band and a couple guys pushing the cart. It stopped at a few houses. A homemade mortar full of gunpowder is shot into the air. The band played and old women crossed themselves and wept. She continued down the street.

On my way back from the market, I stopped by the cathedral and there was a duplicate Mary on a new little temporary altar. They were having a sort of pre-recorded ecstatic guitar service, people were swaying with their arms wrapped in rosaries reaching up to the sky. I walked down to the stage in front of Guadalupe and she was there on her float surrounded by flowers. A woman and a child were taking turns saying continual Ave Maries while a third person help the microphone for them.

Not everyone is so excited about the Virgen. There is some trouble brewing in town. Sunday night, she was mooned by some hooligans in a taxi. The crowd attacked them and fortunately the police were called and escorted the couple away. Probably saved their lives. Silvia says a protestant pastor told them to do it. She has a deep distrust of protestant pastors. She thinks they just try to expand their congregations to increase their own wealth. They are ultimately selfish. Also there is a lot of graffiti written in big letters on the parade routes that says – no to idolatry, God doesn’t want us to worship other gods etc. The church has printed t shirts they are wearing around that say no to idolatry.

Silvia pointed out that there is a difference between venerate and worship. The images are like photos she says, no one thinks they are the Virgen herself. She says people worship all kinds of other idols- money, sex, their jobs, their children, their spouses. She has very little patience with protestants.

Just now, there were fireworks over Guadalupe. I watched them from my balcony under a full moon with the scent of jasmine wafting by. That means she has left the stage and her float is proceeding down Calzada. I, unlike the rest of the people in Granada, don’t like to just sit around on the square for hours and wait for her to get there. I will try to catch a glimpse as she passes by our cross street. Shouldn’t hard to miss, just listen for the firecrackers. When it sounds like they are shelling the house, she should be close.