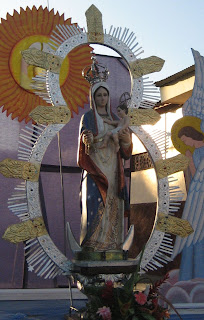 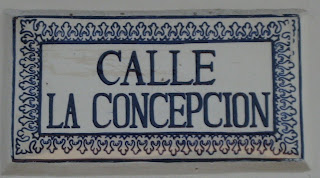 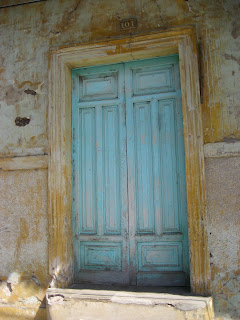 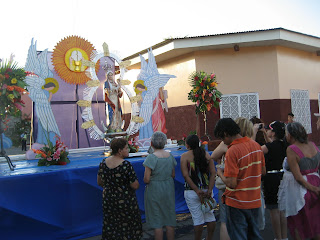 This is the eighth morning in a row we have been awakened by the firecrackers, band and car driving around playing the Purisima songs over the loudspeaker at 4:30 in the morning. I’m losing my infatuation with the whole festival. I love Mary in the moments of silence in the cool and empty cathedral. Tomorrow is Purisima. Finally.

I was cranky until I just headed out of the house and let the film of the place I am in unfold. I went out on my bike in the late afternoon as the sun was angling down. The speed of the bike made it feel like there was a fresh breeze. The visuals are so striking; I never tire of the houses in their sun drenched water based paint. Or the women with baskets on their heads filled with fr 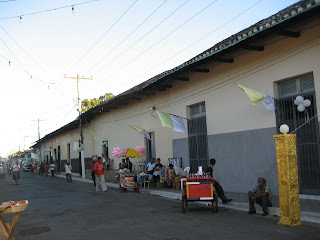 I was looking for La Virgen again. I am compelled. Moni said it was her last night out; tomorrow is just a mass. She is fittingly finishing her tour on the Calle Concepcion. I found her at the end of street on a little stage. She looked so serene holding the baby with his little crown. She has stars on her cape. Th 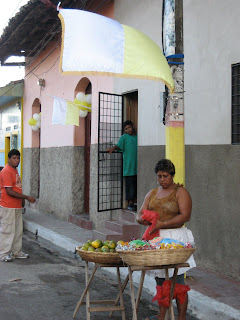 ere were about seven old women, a few of them saying the rosary, gazing into her eyes. Two younger folks were putting the flowers around her on the stage and she was flanked by cut-outs of the Seraphim and Cherubim. I liked this altar the best because it was simple. The street was festooned with yellow and white balloons and yellow and white flags. People were still decorating their door fronts and settling into their chairs on the street. Pillars covered in gold foil were lined up at intervals along the street. The vendors of cotton candy, sweet limes and Purisima candy were setting up. As I glanced in the doorways, I saw many altars to the Virgen decorated with flowers in peoples’ living rooms. Often there was a Christmas tree, too. There was a band playing outside the Sandinista headquarters where they were handing out food baskets. Big crowd outside.
Posted by Tamara at 3:52 PM