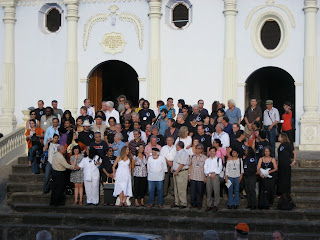 While children all over the US West Coast are skiing, it’s the week of the International Poetry Festival here in Granada. The third week in February each year, the place is just crawling with poets. They arrive from all over the world and can be recognized by their badges. Just like at any other conference, but theirs say “poet” and their country of origin. The most recognizable poets in Nicaragua are Gioconda Belli and Ernesto Cardinal and the have a big presence at the festival.

Ernesto is always the same. He just turned 84. His shoulder length pure white hair flows under an ever-present black beret. As a priest, he was a very early liberation theologist who was a central figure in the revolution. Serving as cultural minister during the first Sandinista years, in the 90’s he broke off with the FSLN to protest Daniel Ortega’s authoritarian rule of the party. He was born in the house (Casa de los tres Mundos) that now serves as Granada’s cultural center and produces the festival.

Gioconda was another central Sandinista figure during the Revolution and Sandista government and since has become Nicaragua’s most beloved novelist and poet. She too broke with the FSLN and while she supports the “purist” Sandino party (MRS) she has focused her energies on literary activities over the last decade. She used the festival this year as an occasion to relea 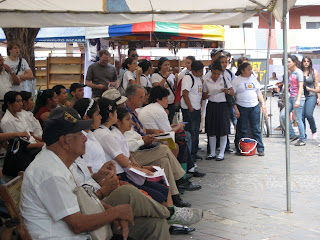 Poetry is the most widely supported and developed literary (or any) art form in Nicaragua. Ruben Dario, the father of modern Spanish poetry, is a celebrated native son. Indeed, a huge amount of time at the poetry festival is devoted to school children reading Dario’s poems on the open mike stage. The newspaper has a weekly poetry section that highlights emerging Nicaraguan poets and established Hispanic poets.

For one week in Granada, poetry is front and center. There are nightly panels of poets reading in a different park or square throughout the city. The readings are followed by concerts that are widely attended as folks gather from all over town to listen. The poets change (some) from year to year, but the events are oddly all exactly the same. Last year, Jonathan had a lovely bike ride in the dark to the old fort to hear German, Spanish and Nicaraguan poets followed by a 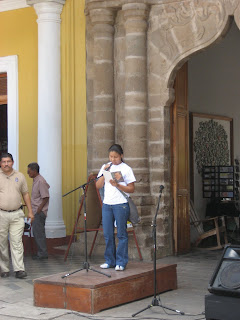 concert by the Kammerata Bach. The exact same schedule was presented this year.

Poetry really is taken to the streets. All day, there is an open mike in front of the Casa de los tres Mundos. There is a carnival where the parade stops at each major square to read poetry as it winds through town with the usual band and dancers. On Friday, the poets travel by bus throughout the district and read poetry in all the outlying towns.

Then, at the end of the week the book fair gets packed up and all the poets leave and the town goes back to its more or less illiterate state.
Posted by Tamara at 9:35 AM