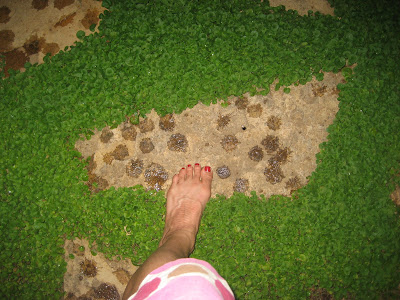 The rainy season, winter, has begun. It came several weeks early this year with thunderstorms and driving rain throughout last week. It is always a surprise when the rain returns to Seattle after the glorious months of July and August and you realize with a start that the weather can hamper your plans. Same here, but the six months of absolutely no rain were terminated with huge amounts of water falling from the sky instead of the gentle mist of the Northwest. I have never seen rain drops so big.

Back in December we had been so thrilled with the locally made opening skylights we installed in the kids room for ventilation. With the rain, it became obvious that each seam of glass and metal leaked, there is no seal and somehow large holes were torn into the roof in the installation. Miguel had to come again and again after each rain to problem solve and patch. The kids had a puddle in their room each morning and it was dripping on Ellen’s bed.

The rain coincided with Ellen’s week long visit. It was so fabulous to walk down the streets of Granada with her again! She loves it here for all the same quirky reasons I do. Good thing she is completely self sufficient in Spanish because despite my best intentions, I ended up working most of the time.

On Friday we hired a car to drive to San Juan del Sur and go to the beach. It was astonishing that in the course of just one week, the landscape has gone from brown to green. The dust isn’t blowing around anymore, but there is increased humidity making the heat, well, hotter.

We got Rene to drive us out to my favorite beach, Mahajual, which is down a dirt road. When we got there, the cooking fire in the beach shack was cold and there were a bunch of bored youth hanging around. We perused the menu, but only ordered cokes and hurried down to the beach. Ellen’s coke exploded all over her dress and as we stepped foot on the beach, the rain began to fall hard. We stood under a beach towel for awhile, but it rained harder and harder so we made a break for the cooking shack where they politely wiped some chairs off and positioned them so as not to be in any leaks. We waited. More rain.

How long does the rain usually last, I asked. Sometimes all day.

Rene, are you worried about getting out? I inquired.

With no let up in sight Ellen proposed returning to San Juan del Sur for lunch. We ran to the car and made it up from the beach no problem. But the road to San Juan del Sur was turning into a river. We couldn’t tell how deep the water was in the low spots so we were waiting for someone coming the other way to see if we could make it. Rene kept asking me, should we wait or go ahead. I didn’t want to make that decision since it was his car. He went cautiously ahead.

Finally we made it back to the paved road. As we drove back into town, some of the steep side roads were like waterfalls. We ate lunch in a beach restaurant on the driest table we could find while rain pounded through the thatch roof and wooden shades. It did stop and we had about ten minutes to walk around in the mud before we headed to Managua to pick Jules up from school. We had mud up to our knees but I noticed a Nicaraguan woman in front of us was also walking in flip flops, but she was spotless. How do they do that?