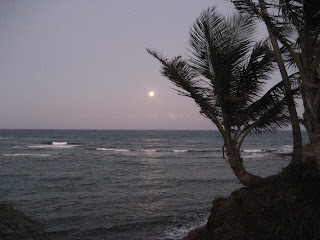 We spent the first night of Passover on Little Corn Island. I had 2 boxes of matzah, some amazing live salad greens from Steve Ensalada by way of Peta and a beet. The chef at Casa Iguana was very obliging. I asked him to roast the beet, boil us half a dozen eggs, wash the greens and find us a bottle of wine. We were stumped by the bitter herbs, because he couldn’t come up with horseradish, or even regular radish. No biggie, it was kind of a pseudo Seder anyway. Fortunately I realized they thought boiled eggs with matzah and salad was our dinner and clarified the purpose of the ceremonial foods in time to get our dinner reservations in. Glad they were serving chicken. 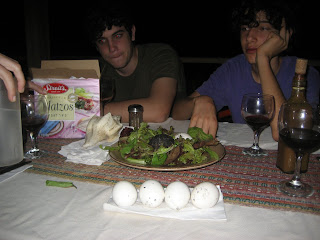 We sang our blessings and ran through the Haggadah rather quickly as a very big moon rose over the Caribbean Sea. The kids didn’t want to sing songs because they are at a painfully conscious stage. 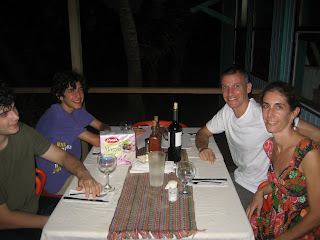 We had a second Seder Friday night in Granada with the Ginsberg family so that I could get a chance to make matzah ball soup and matzah almond roca. The horseradish was again a little problematic, but Laurence assured me there is horseradish in Dijon mustard so we put some of that on the Seder Plate.

When it was time to open the door for Elijah, we heard drums coming down our street and opened the door to find a different prophet covered in blood and stretched out on a funeral pyre. 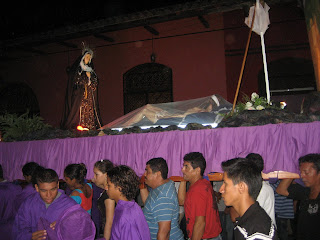 His mother was gazing down at him. They were held a loft by a group of young folks wearing purple hoods and robes. The pointy capirote (hoods) always remind me of the kkk but it was so hot these guys had theirs rolled up over their faces and looked more like purple smurfs.

Whereas I was running out of the house during Purisima to catch every passing of the Virgin, I found I was less motivated for the Semana Santa processions. I find the images of Jesus so much less compelling than Mary. I also may be experiencing a little band and float burnout after all of these months in Granada. There seems to always be a procession in the streets. 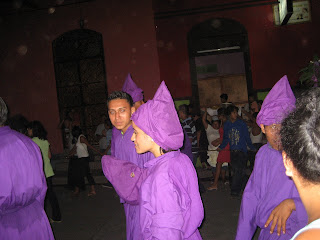 But the oddest interpretation of the season had to be what Avi saw in Masatepe. I wouldn’t have believed it if he hadn’t shown me the pictures. They have an event there each Good Friday that is simply referred to as the Judios (Jews). Many groups of men dress up in matching short skirts and wear pointy hats covered in crepe paper. Each group has a contraption of chains that they pull through the street. A designated Jesus and/or Judas is bound in the middle of the chains and pulled. At first he is held off the ground and flying through the air, but as the runners tire, he gets dragged along the pavement. Major road burn. Also small children are walking around dressed up as Jesus and one lucky youth gets to be tied to the cross and raised up in the town square.

The official news report is 95 dead in traffic accidents (28) drownings (41) homicide (20) and a gun fight (6) for the week of the heaviest traffic and partying of the year. Talk at the kids' school was about the 12 who died when a pickup full of young folks being driven fast by a drunk had a head on collision with a small bus.