Spring Break on Corn Island - getting there 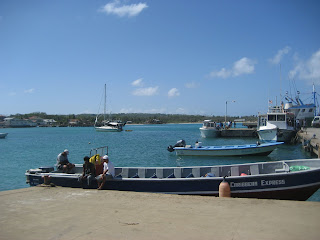 I was nervous about the trip to Little Corn Island. I was freaked by tales of tiny planes landing and taking off from Bluefields and the size of the boat from Big Corn to Little Corn. The trip was a perfect example of why I need to force myself to do some things even when I am scared and even if other people confirm my worst fears. I had a completely different experience. If I had backed out because the anxiety was too much for me, I would have missed a fabulous trip with my family to a tiny Caribbean island.

The plane WAS small and the airport experience was unlike anything I have ever seen. We were told to arrive an hour and a half before the plane was scheduled to leave, but since we already had our tickets and it was such a small plane in such a small country at such a small airport, there seemed to be no reason to get up at 3:30 in the morning. Well, there sort of was. The people who got there early got a boarding pass. The rest of us didn’t, even with tickets waiting in a line that really wasn’t moving while one ticket agent checked everybody in for multiple flights. Then they announced the boarding passes 1-12 should board. We still hadn’t moved and they announced numbers 12-24. Panic. A Managuan whipped out his cell phone and made a call and then ushered his family and all their bags into the boarding area. Jonathan, the New Yorker, got us to the front of the line. The agent weighed us with our bags and wrote it down on her sheet. She gave us some reusable plastic boarding passes. When we got to the gate, the other Corn Island passengers weren’t there. What no one bothered to tell us was that they send three planes of various sizes depending on how many people have bought tickets. Two twelve seaters had already left. When it was our turn, we filed out to a surprisingly comfortable, but completely rectangular two propeller plane (SD3-60). It was pretty old. They threw the bags in the hold and we took off in a matter of minutes.

After awhile the flight attendance walked through the aisles with a tray loaded with Styrofoam cups of Rojita and packets of butter cookies. She went up to chat with the pilot and then wondered back to her seat. I was happily surprised to see us flying over the coast and heading directly to Corn Island. Easy landing on tiny runway, we walked down the stairs and into the small arrival hall where someone wrote down our passport numbers. Everyone waited for a bit. When we got our bags we opened the door and everyone else left then too. Taxis were waiting and we loaded into one for the short ride to the dock. The ponga (smallish open boat with benches) was waiting. We waited in the shade. Eventually the driver started to load people in and we crowded 5 to a seat until the boat was full. We were glad when they passed out life jackets for everyone. The boat started to pull away and a taxi came up with someone in it, so they lanquidly walked over to the boat and got in. We pulled away from the dock and another taxi came up so we made a turn and came back to get two middle aged tourists. They got stuck on the end of the seats. It was pretty choppy and they got drenched.

After a thirty minute trip over the open water in full sun, we pull up to the dock on Little Corn Island. No taxis waiting here because there are no roads, but there were guys with wheelbarrows.
Posted by Tamara at 6:14 PM