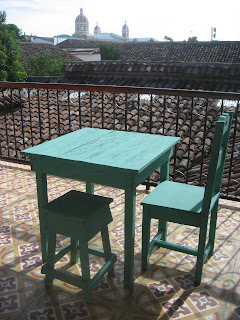 Honeymoon is over. I have sun poisoning and the age spots are appearing at an alarming rate. La Mama de Hans (poor, unsuspecting house guest) has been puking all night. I didn’t do my homework and I am behind on ReWA work. My blog is neglected.

Challenges of working here – Monday for instance, it was a national holiday, but I had business meetings on the phone. There have been constant brass bands and fireworks going on in the street and I have to sit in my chair and speak with my work colleagues in the US over a somewhat crackly Skype line.

This is just like being at home, except that things get so much more complicated and messed up due to my lack of understanding, both the language and the culture. There are two decipherings going on whenever I speak. The listener is trying to bring some meaning into my ver 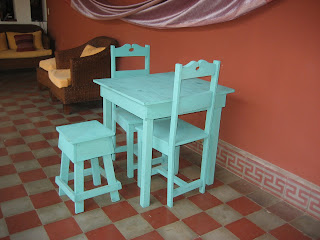 y short and garbled utterances, and they necessarily use their own experience to inform their guessing. But I am using my experience to telegraph my meaning. It is like the game of telephone. I know this is the basics of cross cultural communication, but now I really know who it feels like.

Rodolfo dropped the tables off when I wasn’t here. They were unpainted. Jose showed up a couple days later to paint them. He splashed and dripped paint all over the floor despite no less than 8 requests not to. Jonathan in frustration told him to just stop. Sylvia suggested he take the tables to another place to paint them. Which he did. He said he would be back in the afternoon. He wasn’t. But when we got back from the Masaya night tour at 7:15, Jose was sitting with our tables on our front step waiting for us. I felt awful. He said it wasn’t a problem, he was just relaxing.

The tables are sort of like the ones in the Central Park.
Posted by Tamara at 9:53 PM