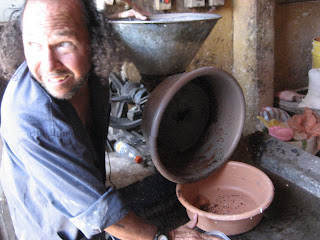 It’s a very simple idea with a lot of steps. Cacao is grown in Nicaragua and I wanted to use it in my baking. At least once a week, I make chocolate cake, brownies or chocolate chip cookies. So far I have had to use imported chocolate – not even high quality, but expensive (relatively) Baker’s chocolate and Hershey’s cocoa from the States. The local high end chocolate makers don’t distribute unsweetened chocolate. My friend Laurence who makes delectable chocolate treats for his business, Eurocafe, explained to me how to go to the market, get the cacao, roast it and return to the market to find the miller to grind it into cacao paste.

So Silvia and I headed to the market for my Spanish lesson and bought some cacao. It was new to Silvia because she doesn’t usually use it. We found a guy with a big bagful and bought two pounds. Once I knew what it looked like, I saw it lots of places. The cacao beans are fermented and then dried, like coffee. They still need to be roasted, so we took them home and when Moni came to cook dinner I asked her how to roast them. It’s like roasting coffee at home – another skill I learned in Nicaragua. You toast the beans in a pan on the stove or in the oven until they are the right color – which is dark brown and the husks are easy to crack off. But actually, the husks aren’t that easy to get off. I spent two hours crunching beans between my fingers. (I unfortunately picked a time when I had no paid staff to help me; Jonathan did one bean and decided to focus on his beer and the sunset.)

Sunday morning we went to the miller with my pathetic little pile of beans. He was grinding up a huge quantity of masa for someone’s tortillas. He ran a lot of water through the machine and then threw my beans in. The were ground in about 4 seconds and my coco paste didn’t even extrude out of the machine, the miller used his hands to wipe the paste out and scrape it into my container. The service cost 7 cords (35 cents). I probably got about a cup and half of paste out of a pound of beans.

As my first baking experiment, I made brownies with my usual recipe substituting 1/3 of a cup of paste for 3 ounces of baking chocolate. They were heavenly; you could taste the smoke of the toasting.
Posted by Tamara at 5:14 PM