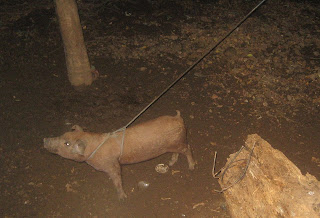 Lucia and Eugenia came by today to give us an update on the pig business. Frankly, we were a little worried that they were going to ask for money to buy another pig to improve their margins. The cost of transport is the same for one pig or many up to a certain point and it has proven to be expensive for them. They have been talking about increasing the number of pigs to 3 a week for a while. They had stopped coming to weekly meetings – whatever, it is their business to run into the ground if they want to – so Jonathan and I agreed, not one cent more until they can clearly demonstrate a profit to us.

But they came to PAY US BACK! They had $100 saved up which they wanted to use as a first payment AND they had enough left over to buy three pigs this week! We are so excited. Jonathan told them we didn’t want the money right now, but he made them promise to open up a savings account with it. They were really uncomfortable with the idea of the bank. They felt like they would be giving their money to someone else. You mean you can take it out whenever you need it? Eugenia asked. Jonathan reassured them pointing out the money would be available for emergencies when they needed it.

Lucia is going to MINSA (Health Department) today to make sure everything is done by the book. With three pigs, they will also be able to eat some of the meat, which is something they haven’t been doing as it has all been going to customers.
Posted by Tamara at 4:57 PM