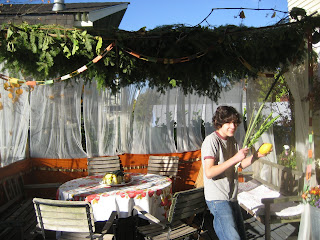 My pool is reflecting the full moon of Sukkot as I write this. It has always been my favorite holiday, well for at least ten years anyway. In Seattle, I make the sukkah out of bamboo and sheer curtains and put fir boughs, laurel branches, grape vines on the roof. I always order a lulav and etrog from the temple. In the mornings I eat my breakfast out there with my oatmeal and coffee steaming and watch the heavy frost melt off the lawn. Every year, we have a potluck. Sometimes it is raining, but it is always fun. Then last year of course we had the best sukkah and supper of all for Noah’s Bar Mitzvah party.

I wanted to recreate our usual practice here, but last week I was overcome with lethargy and indecision. Finally, on Wednesday, I drove to Caterina with Silvia to look for some bamboo. I couldn’t find the street where all the bamboo folks I know are, so I asked 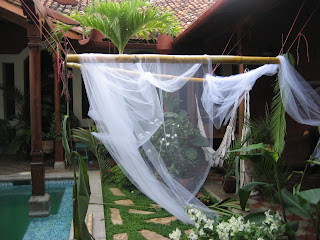 around a little and someone directed me to Juan Nicaragua. I made the mistake of asking for reglas instead of cañas so he didn’t have any poles but he said he would get me some. Would Saturday be ok? No, I said, because I have to finish by Friday night. So we agreed I would come back Friday at 4. Which I did. Instead of the 1 to 2 inch poles that I thought I asked for, Juan’s wife and small son brought out eight 3-4 inch poles. They were pretty heavy and didn’t look like they would hold together with string the way I usually build my sukkah. But there was no other choice. Anyway, I noticed that Juan Nicaragua’s family makes some pretty nice baskets, so I asked if I could have one of those, too. Well, his wife said, these are already ordered by someone, but she hasn’t come yet. Oh I can come back, I said, how much are they? 32 cords ($1.50). Great, if this one isn’t available, when can I come back for another one? She replied, If you have 32 cords now, this one is available!

As we drove back, the fields were all ploughed, but not planted. Angel said the farmers are waiting for the rains to come, but they aren’t coming. Who knows when/if they will be able to plant. Then we discussed Daniel’s (Ortega is always referred to here just by his first name.) plan to buy all the beans and rice directly from the producers and sell them to venders to avoid price speculation. Like most current Sandinista programs, it sounds good in theory but we talked about the various ways it would get corrupted along the way.

We had to stop at La Colonia so that I could get wine for dinner and pesticide to spray my bamboo. Yes, the dark secret of environmentally friendly bamboo is that it is always full of bugs. It is all treated with poison. Except when it isn’t and then you have to treat it yourself so the powder post beetle doesn’t turn your house to dust. I am learning a lot about bamboo these days. Anyway, I was very apologetic because Angel had been working since 5:30 in the morning and it was almost dark. Don’t worry, he said, the day is for working.

I had to let the pesticide dry on the bamboo, so it was practically dark before I started on my sukkah. I decided there was no rush to finish the sukkah before sundown. Sukkot is a whole week and we could contemplate and consider and add to the design. There is no lulav nor etrog. Is it necessary to have the actual piece of material cultural or is it enough to have the idea of the prop and use it as a point of departure, of discussion. Is the absence of the lulav and etrog more powerful than the presence? Especially since here we are trying to figure out how to do the things we are accustomed to doing or even what is the minimum we need to do. Is the negative space more meaningful than the object? What is the minimum I need to do to feel like I am fulfilling my obligations as a Jew, a mother, a host?

This year it is two poles of bamboo with mosquito netting draped over them suspended over the courtyard and embellished with flowers. Jonathan had been judging the high school entrepreneur contest (like Junior Achievement but with a Sandinista edge) at Avi’s school so Avi and the beautiful Regina, his girlfriend, joined us in our makeshift Sukkah. It was just big enough to stand together and say a few blessings.