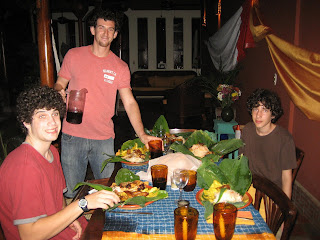 We decided to stay in Granada instead of going out to Carlos’ for Kol Nidre. I printed out the music for Noah to play on his clarinet. I was going to make chicken and rice, but then I got behind and said, Why make chicken and rice when I can get it already made from Chico Tripa for about 60 Cords a person? So Jonathan and Avi went to get us chicken while I set the table. We had a nice meal on banana leaves as the sun was setting, guzzling water to prepare for the fast.

Noah played Kol Nidre on his clarinet, which brought tears to my 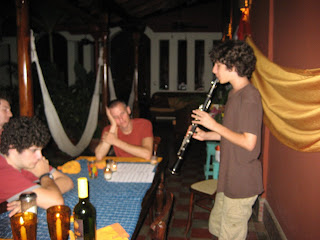 eyes. Then we tried to sing it twice, but it was hard to keep the tune and I really missed Wendy’s voice coming from the back of the synagogue with the lights out. Then we watched Moishe Oysher sing Kol Nidre in the 1939 Yiddish film "Overture To Glory" (Der Vilner Shtot Khazn "The Vilnius City Cantor”). http://www.youtube.com/watch?v=_vkpsFwsQY4

We spent a quiet day at home; there was some reflection. For me, Yom Kippur is a day to be free from the demands of the body; to live for one day on a less material plane. I wondered out to the Cathedral thinking it would be a nice quiet place to sit, but they were having a pre recorded pop music mass in the chapel and it didn’t feel right. I missed Rabbi Beth in her new white tennies. I missed sitting in services with my family and friends. I missed being one of many. I really missed going to Bruce’s to break the fast and eating all that yummy food.

We broke the fast with bagels and dairy kugel. Avi came over after teaching. He mused that it was the first time he had ever done anything regular on Yom Kippur and it felt weird, but it was too hard to shift his classes for that day. The boys got ready for school. Noah wrote an essay about his Jewish name for school. In it, he said he liked being different, but he felt he was just part of one big Jewish pool. Just another drop of Jew, he said.