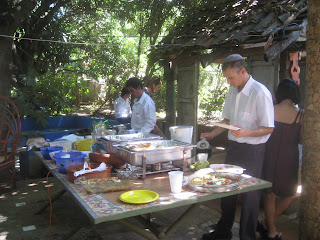 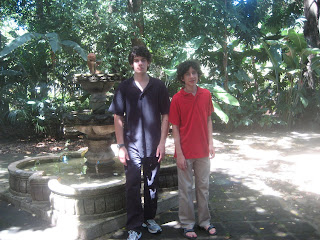 Carlos has a finca in Nindiri that is a sort of Jewish Cultural Center for a diverse group of Jews in Nicaragua. When we first started coming to Nicaragua, I was 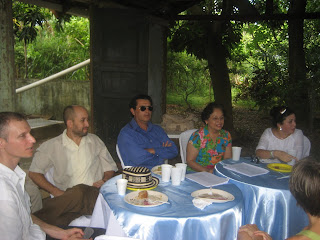 astonished to learn that the Jewish community only numbers about 50 in the whole country, especially when I seemed to have met at least that many. There are a few remaining families of the original Sefardim that came to Nicaragua and a few other folks who have moved to Nicaragua from more Jewish places – like New York. This Rosh Hashana, Carlos hosted services on Sunday morning. We showed up about 15 minutes late and he greeted us saying how old are yours sons? 14 and 16, I said. Great, 3 more we have a minyan, we can get started. Guess who he wasn’t counted in the minyan? That’s right me. And he doesn't even know that I converted. I got a little huffy to myself, but I am a visitor here and I cannot impose my cultural values.

But of course we didn’t get started. We sat around for about two hours I think. We were waiting for Judith with the prayer books. One person left, exasperated with the waiting.

We gathered in the farmhouse sala with a lectern for a 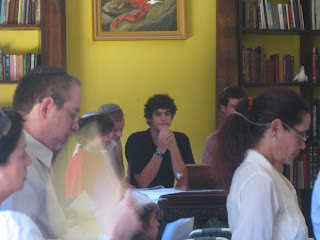 bimah and a wardrobe for an aron kodesh. Carlos started out the prayers, very fast. The melodies, such that they were, were completely different. Some of the prayers were different, too. Eventually, Judith showed up with the prayer books. We were sitting in the front, so Carlos first invited Jules to read some of the English. All the prayers were in Hebrew, Spa 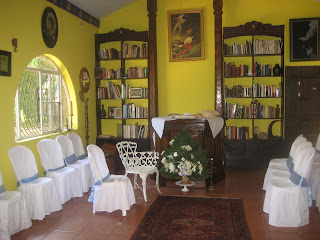 nish and English and I can assure you that in all three languages, the Mothers weren’t mentioned and Ado 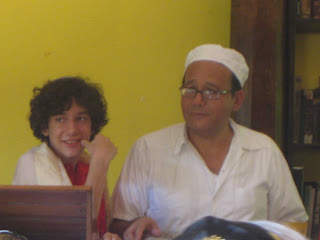 nai was king. Then Carlos had Noah come up and read a prayer he knew. Which he did, but it was confusing because it was out of Carlos’ orthodox prayerbook and Jonathan came up and helped him with the Ashkenazic tune. At that point, being on familiar ground, several of the US contingent chimed in. For the Torah reading, Carlos had the President of the Jewish community open the wardrobe and he removed a teeny tiny torah. It was like one of those they give kids when they start studying torah, but this was a whole one. It was dressed in a white 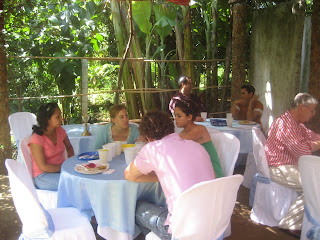 satin cover for the holiday with maribou fringe and bells.

The torah was opened and random folks were called up for aliyot. The first one Paul, stammered when Carlos asked him to announce his donation from the bimah. Carlos claims it is a Sephardic tradition. We said, in the States, we do that quietly behind closed doors. Carlos read the first section of the parsha, then he called Jules for an aliya. Jules couldn’t remember his Hebrew name, but he sang the blessing and gamely read the first few lines phonetically. Then Avi took over. Avi, our Granada Peace Corps teacher, obviously had a much more extensive religious education because he knows the tropes and sings them beautifully. After that, Avi read the rest of the parsha. Noah was really impressed afterward and said, I can’t believe Avi could read the whole Torah. I said, you could too if you put some time into it. I even bet Avi would teach you. Then when you grow up and walk into a congregation anywhere in the world, you could do the same thing. Nah, he said, it’s not really worth all the work.

Then the teeny, tiny Torah was lifted high in the air by one of the visitors from Guatemala, and Avi got to sit and hold it. Then Noah was called up to read the Haftorah. He did the blessing and then sounded out a few lines before Carlos took over again. Carlos included everyone, people were reading in English and Spanish and Hebrew; it didn’t matter. For the 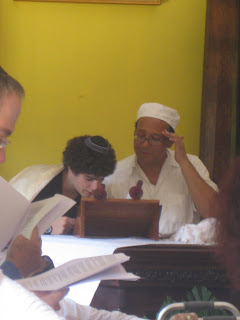 shofar service, Kurt, the owner of a big reptile leather plant, blew the commanded blasts. When Carlos got to the part of the service where you bless the president of the secular government, he was truly pained. He felt commanded to bless Ortega but every fiber of his being resisted it. He read the prayer quickly and told us to take it for what it was worth. Someone quoted Fiddler on the Roof – bless and keep him far away from us. (Blessing for the czar).

For the Tekiah Gedolah, Jonathan used the shofar Noah had brought with him from home and blew a long, low call. He turned red. Kurt couldn’t believe that Jonathan’s tekiah outlasted his, so he tried to beat it on Noah’s shofar. Couldn’t do it. 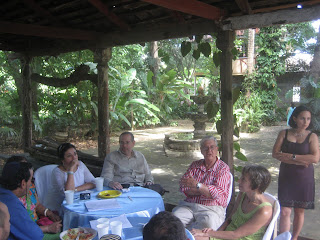 After the service, we gathered in the shady garden of the finca and had round challah, honey and apples and potluck. Here's Thelma looking glamorous and kind of bored. Thanks Thelma for the pictures of the boys in services!

When we got back home the kids settled in to do their homework. I heard a band coming down the street, so I pulled my rocking chair out on the sidewalk to watch the Virgin of Guadalupe being carried down our street. She had a good band backing her up, so I followed her to the church. The Virgin bearers stopped in front of a house and a store to bring the Virgin to the door. I asked someone why she stopped at certain houses and they said, the people order her to come by their house and the church sends her out to raise money. The band accompanied her all the w 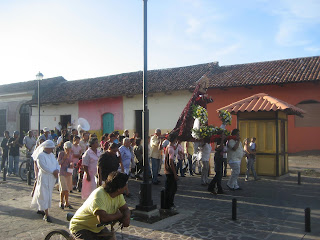 ay into the church where she was put in the front and some old ladies fussed with her flowers.
Posted by Tamara at 7:50 PM