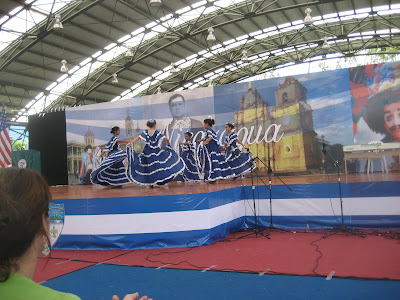 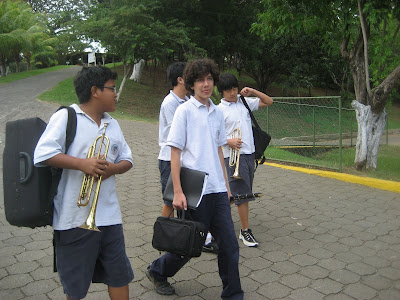 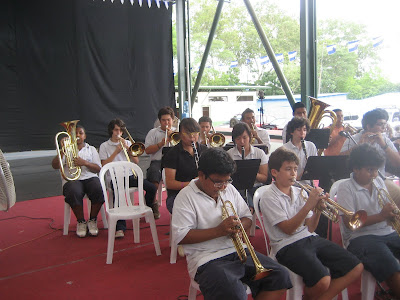 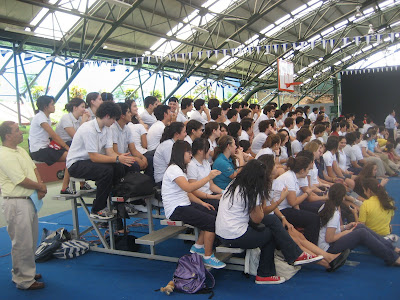 Friday was the Conmemoración Fiestas Patrias at the American Nicaraguan school. I was one of a handful of parents who watched with the entire Secondary School. Noah was playing in the band so I went to see what it was like. Each class did a presentation, skit, musical number or dance and the performances were of the highest level. The band played the national anthems of the US and Nicaragua along with a few rousing Sousa numbers. Students sang Carlos Mejia Godoy’s revolutionary folk songs with true campesino feeling. A group of sixth grade girls whirled in a Nicaraguan folk dance called el Sapo (toad, I think). The Chinese class led the crowd in a round of happy birthday in Mandarin. Then two girls hobbled out wrapped up in butcher paper to look like candles. Their teacher, a Chinese lady wearing a Nicaraguan folk dress, ripped the paper off their bodies leaving them standing before the whole school in Chinese silk halter tops and very tight white pants with paper birthday tiaras on their heads. They laughed nervously, but without embarrassment the way teen age girls do then they are standing before a crowd doing something that seemed funny when they thought of it.

I stayed for about an hour, but then I left to go to PriceSmart. Noah was sitting in a stupor in the band section. I snuck over to where Jules was sitting with Alex and Pia, Alex’s brother’s girlfriend. Jules didn’t even seem that embarrassed to talk to me at school. Angel had been watching from the back of the room. As we headed to do the shopping, he recounted his days as a champion marimba player traveling across Nicaragua with his brother to compete during the early Sandinista years.
Posted by Tamara at 3:37 PM