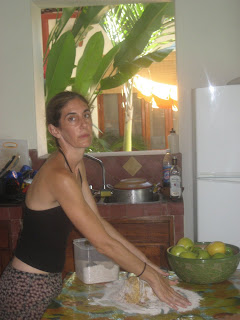 Thursday Angel drove me out to La Colonia – the supermarket where they have all of the imported stuff – to start my holiday shopping. Erev Rosh Hoshana is Friday and we had an ever increasing number of people coming over for Shabbat dinner. I was looking for brisket, whole chickens, wine, apples and flat noodles. I picked the piece of beef that looked most like brisket, but all the fresh chickens were cut up. And I’m afraid this grocery store was lacking in that aisle where they have the manishewitz noodles and yahrzeit candles. We’re going to have kugel made with Fettacini. The apples are all from Washington and I’m pretty sure they aren’t the new crop. At the grocery store, someone came running over to unload my items on the cart, bag them and take them out to the car. These are eggs he said as he passed the bag to Angel who arranged all the bags in the car.

On the way home, we stopped at the bank to 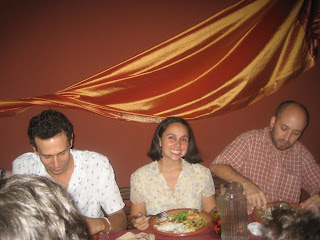 get some money for Angel to buy some medicine for his wife. I do totally trust him, but I was still glad to see the actual medicine receipts. Aren’t the Sandinista passing out free medicine yet? 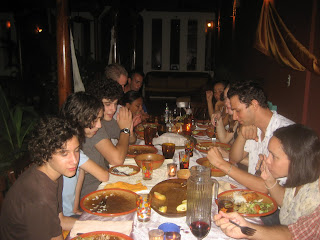 Angel carried everything into the house where Moni was getting dinner ready. She agreed to work double tomorrow instead of Saturday to help me get ready. This will be my first holiday pre 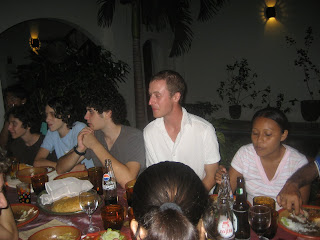 p in my own home with servants. Moni listened to Jonathan and I argue about how we make the brisket and then we told her to just go ahead and make it her way. After she left, I snuck in a few of my favorite items into the sauce.

Friday morning I headed to the market to find my chickens and fresh items. I had to ask around a lot for the Carniceria (butcher) San Martin. I usually avoid the fresh meat section of the market because all those pieces of animals hanging over the counters makes me feel a little sick. And it smells. But I figured they would know who to find the butcher. I went in circles because I kept getting directed to the Plastics San Martin where they have all those little buckets instead of the butcher, but I finally found it.

I stood in the crowd and eventually made it to the front and asked for three whole chickens. Most people were getting a little bit of this or that in a small bag. The workers are all wearing bright green floppy caps with little masks made from the same fabric. Two older ladies are in charge of the till. My three chickens were also frozen. When I got home and told Moni how disappointed I was that I couldn’t get whole fresh chickens, she rolled her eyes and said, There isn’t much of a market for whole chickens here. But they weren’t that expensive, I said, only about 20 cords ($1) a pound. Well, people here buy want to buy chicken for 18 or 19 cordovas and they only want one pound she said.

I bought guava to dip in the honey I brought home from the mountains. I made chocolate chip challah and honey cake and kugel. Sylvia came to teach Spanish, but I was too busy. We kneaded the challah and Fabiola made a small one to take home. The challah I make here expands to gigantic proportions, but it tastes good. 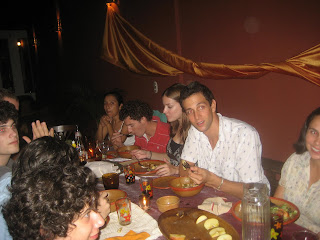 Even though Cristina stayed late and Moni came early and stayed late, I still wasn’t ready on time, just like at home. It was sure great to have someone else cleaning up after me! Thankfully, everyone was late.

Avi came with 4 other Peace Corps members – Katie from Nidiri, Adam from way far away in the Rio San Juan and Max (not technically peace corps, but of that ilk) from Honduras. We started off with rum and cokes (for a sweet new year!) Laurence called to say they would be late because Zoey was somewhere in Managua, but they weren’t sure where. Lucia, Eugenia, Moise and Omar joined us, but Silvia had to stay at home and take care of her dad because her mom was at the hospital with her grandmother. 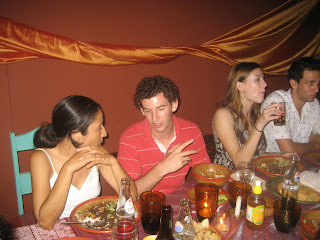 We sat down at a long table, just like at home and I admit I had goosebumps as we started the blessings and everyone joined in. We translated for the non English speakers and explained as best we could. It was, of course, the first time the Lopez-Rodriguez family had ever been part of a Jewish celebra 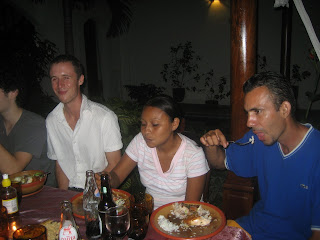 tion. We went around the table and said our thanks for something sweet. I was so proud of Jules because he said his part in Spanish. I love the way he just goes for it with the few words he has.

The wine flowed, well except for the Nicaraguans who took a sip and politely switched to beer or soda. Talk turned to politics and comparing the situation in different parts of Central America. Lucia was in her element sharing her political views with everyone. The young folks were idealistic and engaged, but at the same time critical and realistic of what is going on around them. The North American contingent had an impressive command of Spanish and more importantly, the gumption to throw 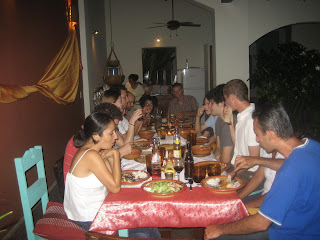 themselves into the conversation, whether they had the right words or not.

Moni stayed late to do the most of the dishes and then left while we sat longer around the table talking. It was actually just like at home. While I missed my dear friends and family we usually share the holiday with, it was fun to recreate the table in another country and gather in the tribe and share our celebration. Push the tables together and fill them with food and something good usually comes out of it.