Transitions are always hard. Jules seems to have left a shoe up North in the mountains, which would be no big deal except that size 15 running shoes are rather hard to find in Nicaragua. He was upset and surly this morning when he discovered it missing as he was trying to get out the door to school at 6 am. He exchanged some harsh words with his father about why he had to come to this ***** country and get up at 5:30 every morning.

Noah came home practically in tears because he had left his clarinet at school. He discovered it 40 minutes into the ride home so they didn’t turn around. Angel asked if he was sick, I said, no he forgot his clarinet at school. Oh is that what is in that little suitcase he is always carrying with him? Then Angel looked at me really hard, concentrating on what I might be trying to ask him. Where do you pick up the boys at school I (thought I) asked. Complete incomprehension in his eyes. He really doesn’t want to tell me he doesn’t understand, but I have botched it so badly, he can’t make any sense out of it. Where do the boys wait for you? Although I think it was more like “to where waiting the children.” Huge look of relief on his face as he explains to me where he usually gets the boys.

Both boys flopped on their beds Noah to his homework and Jules to his computer. I called the school and Noah’s clarinet has been located and is waiting for him in the middle school office. Jules was glad to hear I had bought an extra pair of sneakers and we had a nice little chat about whether Jonathan’s business should accept money from the gold miners. Noah and I sat across the table from each other and with Tignieu’s Pan de Coco and a pound of La Garnacha goat cheese between us. All’s right with the world again. These are pictures of Tignieu and his oven. 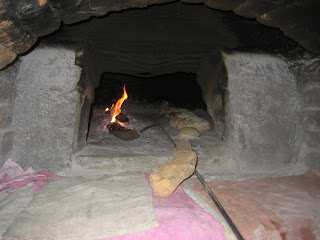 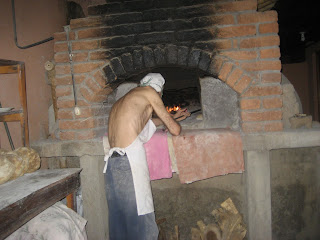