Jules went to his first party Friday night. He was invited to a school mates Quince Años. I only found out about the party a few days before and I was a little scared by the words traje cocktail. I asked my guide in all things Nicaraguan, my friend Thelma, and she said Long sleeved shirt, tie, dress pants and nice shoes. Jules' research at school confirmed the dress code. Well, Jules has a pair of black chinos and that is it. It somehow hadn't occurred to me that he would need dress shoes in Nicaragua. After all, on all other trips to the country, he just took a pair of sa 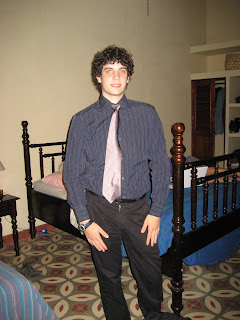 ndals and a pair of sneakers. I thought I was showing great foresight when I brought two pairs of running shoes for him. I hadn't anticipated the dress requirements of attending a private school in Managua.

My first stop was the used clothing store in Granada. It is like value village but in an open courtyard. I was hoping some big boned swede had donated some large dress shoes before he took off. No luck. I would need to go to Managua. Fortunately, Thelma needed to make some deliveries so she went with me. We stopped at a couple of stores and asked what was the biggest shoe size they had - only 11. With time running out, Thelma got on the phone and called her uncle - Tio, where is the best store to find size 14 shoes? He said, Your best bet is Lumesa, the one at Plaza Inter. Excellent advice, they had one pair of size fourteen shoes and they were acceptable. 32 bucks.

For the party, Jules wore a shirt of Jonathan's and a tie from Laurence and Hobbes wore Jules' bar mitzvah shirt. They looked very handsome. Angel drove and I told the boys to leave around 11 so Angel could get some sleep, but Angel said, its up to them they can leave whenever they want. I called Jules around midnight and he said he was just leaving. We waited up. 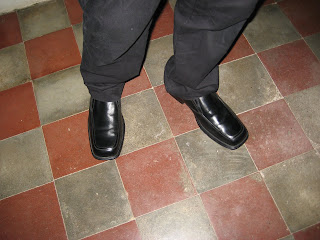 Thelma and I compared notes as each of our sons reported on the other one. Seems a good time was had by all. I just stopped by Jules' room on my way to bed and there is another invitation; this one with the ominous phrase - traje formal! 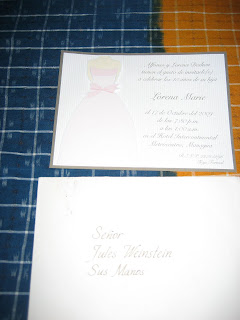