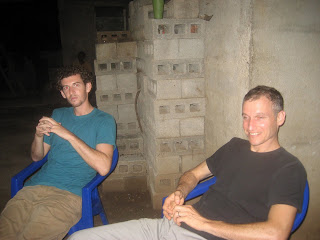 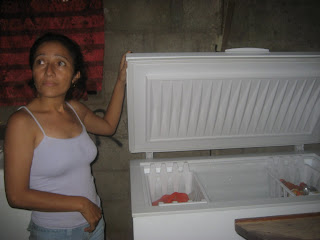 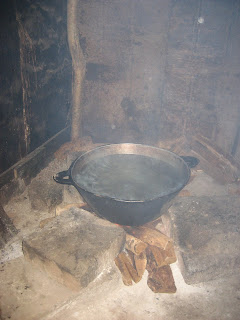 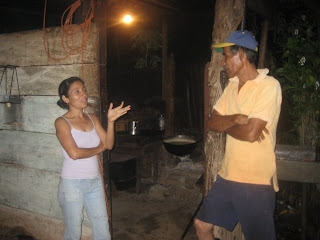 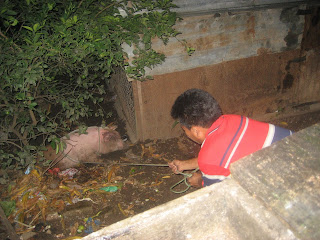 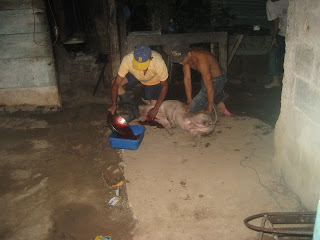 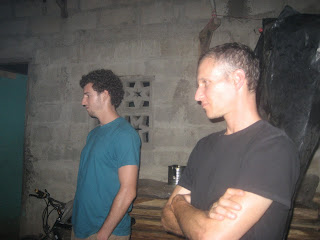 If you are veg, you can skip this one.

Last night we were sitting around having dinner with Avi, one of the Granada Peace Corps volunteers and I looked at my watch and said, hey you guys, Silvia told me we can come watch them slaughter pigs tonight and they are starting early. Avi said, Yeah that sounds like fun, and Jonathan said, I’d kind of like to see that. So we hopped on the bikes and rode over to Silvia and Lucia’s house. Now Silvia told me that would start getting ready at 8 and then the actual slaughtering would be around 9. Neither Jonathan nor Avi wanted to stay up that late, so we were hoping to show up watch some of the prep, see them kill and cut up the animal and be back at home by 10.

All multi generations of the Rodriguez-Lopez clan were glad to see us and happy to get to know Avi. He teaches in a school close by so they had some mutual acquain 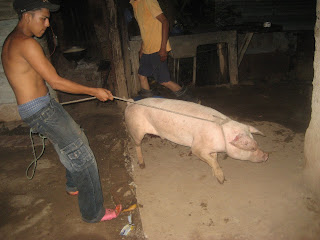 tances. We sat around and chatted for a while. Lucia showed us the new freezer and we enjoyed some Fanta Roja with ice provided by it. We met the matador, Don Jose Andre who has been slaughtering pigs for forty years. We said, why do you slaughter pigs in the middle of the night? Both Lucia and Don Jose said, because that’s when its done. Don Jose admitted that he had occasionally killed a pig during the day, but only if it was like for a fiesta or something. He charges 200 cords (10 bucks) for the first pig and 100 more for each additional one and his services include traveling to the farm to select the pig, killing it, cleaning it and cutting it up in pieces. He usually does about 7 pigs a night. 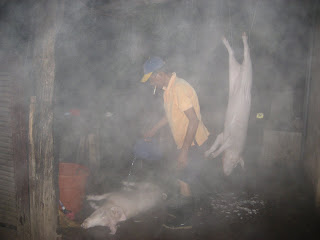 kettle yet. I asked when they were going to start the water and Silvia went to get the kettle. Don Jose ran his finger over the edge and said, this won’t do, so Silvia went to wash it. They filled it up and started the fire. Well you know what they say about a watched pot, and this one was 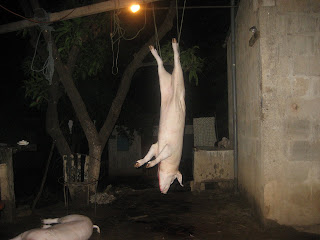 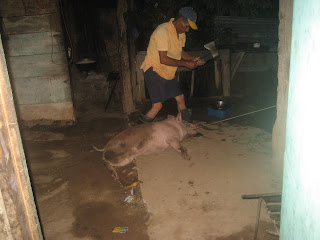 Now I am ashamed to admit that even though I eat meat, I have never seen an animal killed for food, except maybe a fish. I was afraid I would fainting. Silvia and Lucia thought that was pretty funny. I was really nervous about it, but at the same time, I was awfully curious. I felt it was my duty as a meat eater to watch. Plus Silvia and Lucia really wanted pictures.

Silvia put up a sheet and some plastic bags on the clothes line so that the neighbors wouldn’t see. It is technically ok to kill a pig at home, but there is some gray area about multiple pigs. They were doing two tonight. I visited the animals which were tied to a bush and sleeping comfortably. When the water started to boil, Rodolfo went down the bank and pulled the first pig up to the killing floor. The pig was screaming. He had gotten caught in his rope halter and was very uncomfortable. He didn’t want to come up. But Rodolfo pulled really hard. Then Don Jose, who weighs maybe a hundred pounds soaking wet grabbed the rope and wrestled the pig to the ground. It calmed down immediately. He picked up his ax and gave it 3 quick blows to the head with the back of the ax. He took his knife and slit the pig’s throat and collected all the blood pouring out in a metal mixing bowl. The pigs legs twitched in the air and then it was completely still while Rudy and Don Jose leaned on it with their knees to push the blood out. It was about 4 big bowls full. Pigs blood is essential for a Granada delicacy whose name I forgot and Lucia will be able to sell it.

Ramon pulled the other pig up who was squealing too but not as much. Pig #2 sniffed the dead pig and became very still. Then Don Jose whacked him with the back of the ax and he soon joined the other pig on the floor. Now that the pigs were dead and not screaming, we all came out of the doorway where we had been cowering to watch the rest of the work. We settled down on the chairs that were ringing the cement pad it is outside between the living room and the cook house where they do the pig work. I would have felt stupid sitting and watching if it hadn’t been for the fact that many other family members were sitting and watching. Basically, Don Jose did everything amazingly efficiently with just a little help with the heavy lifting.

The next step was the one that took the longest. Don Jose dipped boiling water over the carcasses and rubbed and scraped the bristles and outer layer of skin off. It was hypnotic to watch. I could have sat there all night, actually I already had. As he worked on the pigs they transformed from dead bodies to beautiful gleaming objects that had the form of pigs. I thought about time in Nicaragua. No one is ever in a hurry. Everyone works really long hours, but there is very little rushing. I have noticed that my attention span is short compared to the Nicaraguans. People always show up on time, but things rarely start on time. It was much like waiting for the parade. No one said, I can’t believe the parade started 5 hours late, they just said, I got tired of waiting so I left.

The matador had to stop twice to heat up another kettle of water. He had a cigarette and coffee and joked around with Lucia while the water heated. Avi’s girlfriend called and he said, I can’t talk now, I’m watching a pig get slaughtered. He promised to call when it was done – 15 minutes or so. But it wasn’t done. We wanted to wait to see the pig cut up, but the church bells were striking 11 and another pot of water was just put on the fire. Don Jose said in disbelief, 11 already?

We stayed to see them hoist the pig by his tendons up on the beam, but by 11:30 we had to leave so that we could get to bed. Jorge was still up, but Fabiola had fallen asleep in her grandmother’s arms in the rocking chair. It was Silvia and Eugenia’s turn to stay up with the Don Jose while he cut up the pig. The rest of the family was going to get a little sleep before they start the deliveries at 4:30 in the morning.

We rode home through the empty streets. Only a few taxis, drunks and sleeping glue sniffers were out. The market was clean and quiet when we rode through it.
Posted by Tamara at 3:22 PM