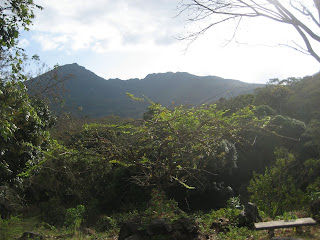 Mombacho Volcano is the dramatic backdrop to all postcard perfect shots of Granada. I often gaze at its cool heights from my sweltering balcony and wish I were there. Saturday, our friend Mitch, owner of Hotel Spa Granada, a fabulous place NOW OPEN in the center of Granada, invited us to explore the property a friend of his has on the mountain. The trip had been part of a package promotion for Valentines Day at the Hotel. Since technically, the hotel wasn’t open, no one signed up. Great opportunity to 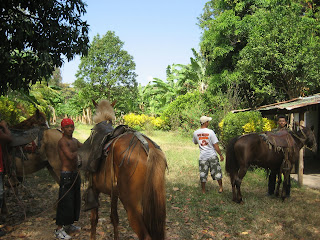 see Mombacho in a way I have always wanted to. We joined Mitch and his wife Amanda, and the young French couple that runs the hotel, Alain and Clara Isabelle.

We started with a boat ride from Marina Colcibolca through the Isletas. As soo 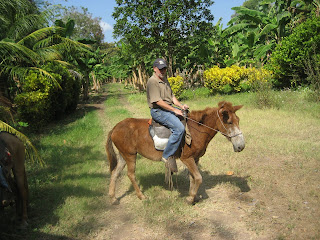 n as we were out on the water, Jonathan and I said to each other, why don’t we do this more often? It was so great just to be among the islands with their fancy villas, or simple fishing shacks. The effects of the drought were evident as we looked back at the desiccated foliage of the mainland, but the boat turned toward the green slopes of Mombacho and we headed across the open water to Raul’s land.

Ten minutes later we pulled up to the dock and were met by the caretaker who lived in a small house by the water. Chickens and ducks were wandering around and beans were cooking on an open fire. He led us up the road to meet our horses. On the edge of a plantain field, we each picked a horse and mounted up. Mitch picked a horse that looked more like a mule. I just grabbed a red one. Turned out to be a good horse. She took off with just a little encouragement. Mitch was whaling on his mule to no avail. Amanda had been insistent that she was not going to ride, but Mitch refused to believe just how serious she was. She asked for the smallest horse, which looked pretty funny because she was the tallest one there. As soon as she climbed up, she had a panic attack and had to get off the horse. Amanda walked into the field retching. She composed herself quickly, but refused to get back on her horse, or any horse. 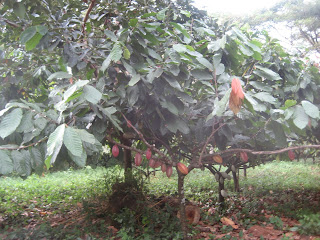 We went first through the plantanos then through fields of cacao. It was the first time I had seen cacao growing on the tree. The cacao pods grow right off the main branches and trunk. They start out a red color and then turn yellow when they are ready to harvest. At least that is what I think. The guide knew nothing. Maybe there were two different kinds, yellow and red. One of the workers cut open a pod for us and the cacao beans were inside in a white milky pulp. We sucked the sweet pulp off of the beans. I mistakenly chewed my bean. It was kind of bitter. 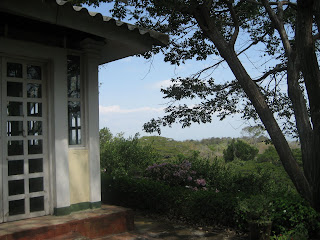 A little higher up came to the Hacienda which had magnificent views across the Isletas and back toward Mombacho. We got off the horses and picked some mandarins and oranges off of the trees. Amanda announced she wasn’t going any further but she would happily sit and read her book. We left the backpack with the lunches with her and rode farther up the mountain. 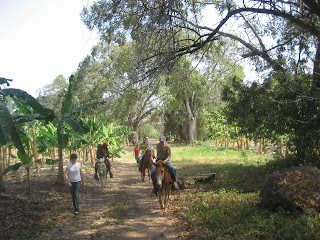 We rode through coffee and cacao plantations. One small hacienda had cacao spread out on concrete pads to ferment and dry. The coffee season has past. While it got greener as we went up, even the coffee looked a little dry to me. 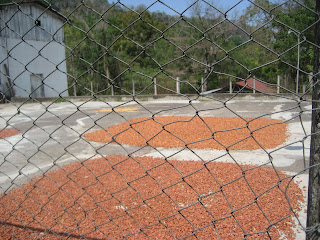 After a couple hours, we came to a place were we could see down to the lake again. There was an old shell of a structure with the roof caved in. Just needed a little work. We had some oranges off the tree and contemplated the next leg of the trip. The guide was supposed to take us up a path on foot to the crater edge where we could meet the road down the other side of Mombacho and our driver. Since the guide didn’t seem to know which way to go even when we were on the road, and the trip had already taken more than twice as long as he had said it would. We decided not to continue on that way and return down the mountain for lunch. We were all tired of riding the horses. We started to walk down, but it was going kind of slow and we were hungry, so we decided to run. Mitch opted to get back on the horse but Alain, Jonathan, Clare Isabelle and I took off. 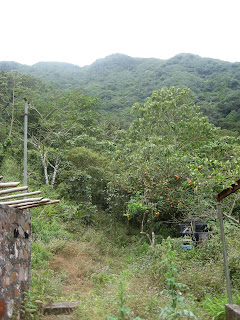 Running down a mountain is actually one of my favorite things to do. We had to watch our feet, but the trail was a road, so it wasn’t that bad. We flew with dogs chasing us and hacienda guards looking at us quizzically. I got too hot, so I stopped to change from my jeans into a pair of shorts I had in my purse. I was more comfortable, but I think that is why I was covered in ticks when I got home.

We got back to the Hacienda and found Amanda relaxing on the gazebo. Mitch wasn't there yet so we went down to a small sulphury pool fed by hot springs just below the house. It felt great. Would have been perfect with a Toña. From then on the thought the ice cold Nicaraguan beer became an obsession. We had our lunch noting the lack of beer and ever diminishing store of water. After we left the mountain, we traveled over to the new Jicaro Lodge in hopes of a cold one and checking out the place. It is some slightly interesting, but not very well integrated "eco cabins" crowded onto a very small Isleta. We were literally escorted off the island by a young smug gringo manager because he didn't want to destroy the vibe. Don't ever go there. I am hoping that on the week ends, their neighbor villa owners fac 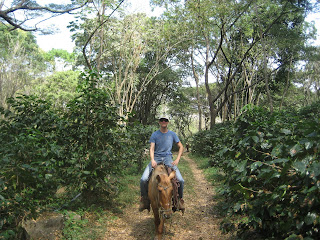 e their speakers toward the island and blast them. Quiet is so not Nica.

We still needed our beer, so after our boat ride back to the main island we sat outside at the Restaurant at the Asesse marina and had a few cold ones. They were playing the worst Merengue songs they could find. Really loud. 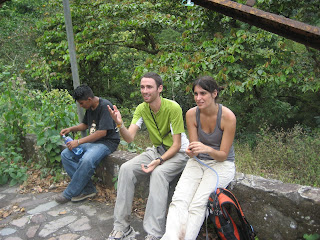 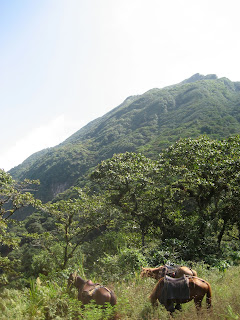