To Riobamba and beyond 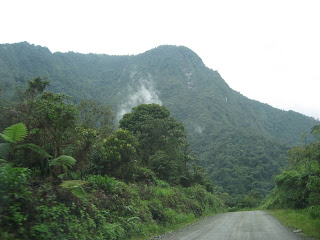 We drove a spectacular road to Baños. As we climbed the rainforest flora changed back to Paramo. The road was very basic although reputed to be the highest paved road in Ecuador. It wasn’t really paved of course. We 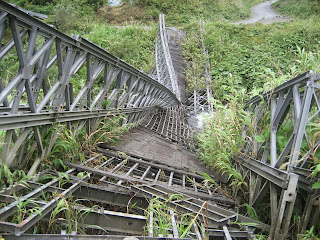 came to a bridge that had fallen and were confused about which way to go until we saw a line of small rocks going through the river. That was the way to go. Jonathan drove slowly through, but not so slow as to get stuck. T 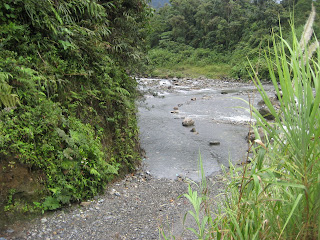 he pass went through beautiful lake area with fog drifting through it. The road didn’t go where we expecte 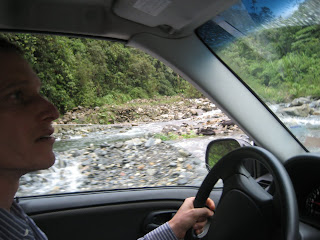 d it to, but that didn’t stop everyone we asked to tell us to just keep going.

So we had expected to spend the night in a small town with a great market the next day, but found ourselves at dusk in Riobamba. We stayed at the Hotel Zeus which had had a bizarre make-over in the seventies from which it never recovered. We ate so 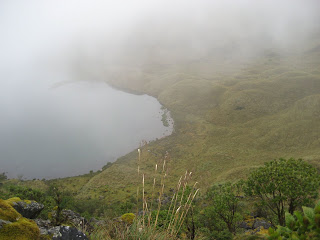 me bad Chinese food and strained our eyes to see the view we were promised of Chambarazo from our room.

Next day was New Year’s Eve and our first task was to find someone to wash our mud caked clothes which I had prewashed in the mirror walled Jacuzzi at the Zeus. We found an obliging laundry that would be open until 4 and then checked out of the hotel and drove to Chambarazo. We had been given conflicting directions and we didn’t have much time, but we were determined to at least get to the base of the mountain whose peak, due to the earth’s bulge at the equator, is the closest point on earth to the sun. 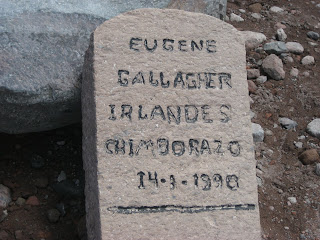 We drove up the mountain, more spectacular views, ho-hum and across a vicuña reserve. Their was a lodge at 4800 meters where the path went up to another lodge from which people could go to the summit. We arrived with a group of school girls and boys who were eager to practice some English.

The path was lined with gravestones of people who had died on the mountain. Jonathan insisted on reaching 5000 meters, but the kids and I were dressed for lower elevations and sa 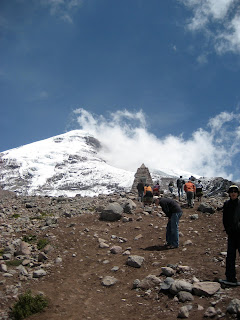 t in the lodge and drank instant coffee. Jonathan was exhilarated from the experience and the kids were convinced the altitude was giving him that fatal false sense of confidence they had read about in Into Thin Air. 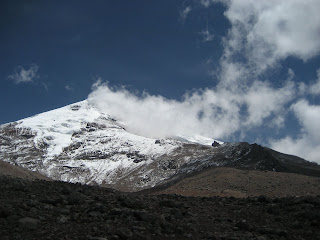 We all got down safely, got our laundry and drove to Baños. Since it was New Year’s Eve, we were stopped quite often on the road by children dressed in costumes and stopping cars with a rope across the road. You just need to gi 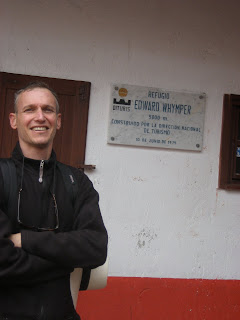 ve them a nickel or a dime, but we had been stopped so many times we were out of small change and the last ones looked at us incredulously when we gave them a dollar.

As the night wore on, the children were replaced by widows of the old year. These were guys dressed in drag carrying baby dolls and collecting money to take care of their “children.” It gets old real fast.
We stayed in the Posada del Arte which was fortunately in a quiet side of a very loud town. At midnight, everyone burns the old year – effigies you can buy along the road or make yourself. Extreme creativity was displayed. The streets where choked with smoke and some of the piles were giant. In the square, kids were jumping over th 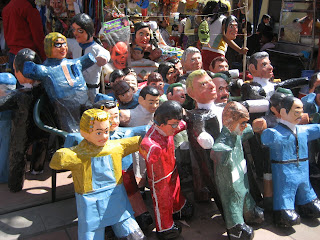 e fires and fireworks were shooting into the crowd. Not a bombero in sight.

We went to bed (relatively) early despite the noise. We spent the week end in Baños, but we didn’t like it much. A little too much like Hood River, Oregon. We were ready to go home. Sunday we drove to Guayaquil to fly back to Nicaragua.

We were all so happy to be back in our own (mostly) scorpion free beds.
Posted by Tamara at 7:05 PM