Night in the Shuar village 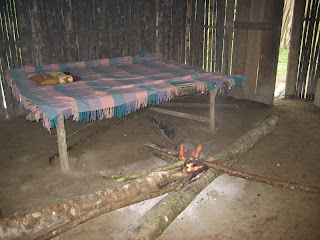 Linda brought in candles, melted them to the wooden table and a small wooden shelf on the wall and lit them so that we would have light. We had a supper of spaghetti with meat sauce which I admit was difficult for me to eat because of the unknown origin of the salty meat. Cui (guinea pig), pork, whatever. Tsunki joined us and Victoria, Mango and Bridget went back and forth with the dishes and things. We drank a delicious sweet tea. Tsunki talked about his life and dreams. He has spent many years living in Ecuador’s cities working as a guide in the rivers and forests. He has tried to visit Europe and the US several times at the invitation of people he has worked with in Ecuador, but each time is denied a Visa. He would like to travel, but also realizes that moving away wouldn’t get him anything more. He has a friend that lived in Spain for many years. He saved up enough money to come back to Macas and buy a house and taxi. He smashed the taxi because he has a drinking problem. He lost the house because he had to pay for the taxi. Many years wasted in a cold cruel world and no better off. He says, especially now with the children, he feels like he has everything he needs here. Safe environment, loving family, enough food and all the free healthcare he might need.

So different than my perspective. I see the kids in their always dirty clothes, rotten teeth, haphazard schooling, living surrounded by venomous snakes hours from the nearest hospital. What future have they got? But maybe their future is right for them. 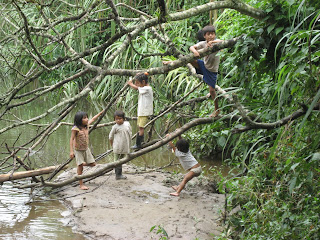 Jose came in later to chat and share Shuar music with us. His Spanish isn’t that good and my shuar is terrible. I forgot immediately every word he taught us. We had rather magical evening while he played the simple instruments – a wood flute, a single stringed violin, a drum and a tortoise shell that you played by rubbing your hand on its resined edge. It is quite a bit harder to make the low, haunting vibration than it looks. Jose sang love songs and folk songs. We tried all the instruments too. Jonathan was pretty good and he played 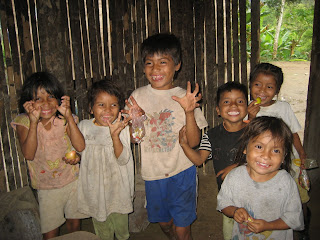 the flute while Tsunki played the violin and Jose rubbed the turtle shell.

When it was time to sleep, Linda built a fire in the middle of the room with long logs that met in the middle where the fire was. This would keep the mosquitoes away. There were no bed nets as promised. But fire really did work. Unfortunately, we didn’t know how to tend a fire like that and it went out and we were quite cold. We didn’t have sleeping bags, so she rounded up what she could find from her house – a couple blankets and a very rank sleeping bag. We slept fully clothed on our wooden platforms, making pillows for ourselves out of the few remaining clothes we weren’t wearing to keep warm. We did not sleep much.

Noah woke up at 5:30 (prime snake time) with terrible stomach pains (that damn chichi!) It was raining. Jonathan went with him out into the field with a flashlight. They got back ok and it was finally breakfast time. We had coffee and bread brought from the city with eggs. The fire was built back up in our room because Jose had a patient. A young girl who has been having seizures. They boiled the leaves for the tea for hours. 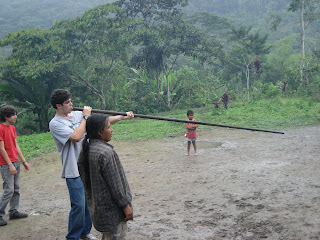 Meanwhile, Jose took us out in the canoe to see the birds and plants down the river. All the kids followed along and climbed the trees waiting for us to return. Next activity was using the long poison dart gun. That was really fun. The kids and Jonathan took turns blowing a bamboo splinter through a hollow wooden tube. Only Jonathan met the target – a banana on a stick. Tsunki tried to shoot a bird 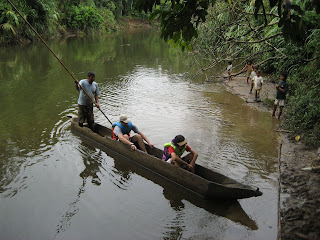 out of a tree, but couldn’t get a clear shot.

After lunch – steamed fish with yucca in banana leaves – we walked back out of the forest where Marcelo was waiting for us on the road with the taxi. We walked across the bridge, said good bye to Tsunki and his family who were going to San Jose, Tsunki’s 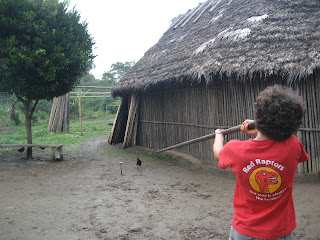 home spend New Year’s Day with his family and returned to the hotel for our things. They were all there. So was the car. Time to head to Baños.