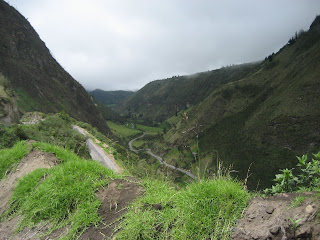 No traffic from Quito to Chugchilan as we drove up into the mountains on Christmas Day. We turn off the Pan Americano and onto the Quilotoa Loop which is a mostly paved road that connects scattered Highland communities. Farmers are growing corn and potatoes, on fields that seem at times to be at right angles to the road. The fields aren’t terraced, but each row is a ridge that traps its own water. I 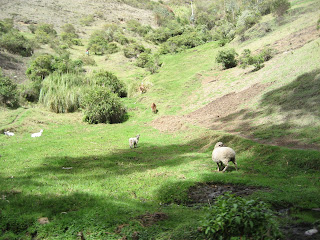 am amazed that it works and all the soil isn’t washing off the hills. These 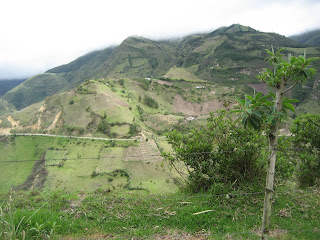 mountains are densely inhabited and there are very few forests left. Every inch is fields or pasture. Cows graze, good old black and white Herefords like at home. Each fold of cliff that holds a mountain stream has a flock of fluffy sheet eating the green grass that grows there.

As we drive the first part of the loop, children and sometimes adults come running when our car goes by. They beg for money. We are astounded because they seem to be so much better off than most of the people in Nicaragua, but we only see people asking for money along the roa 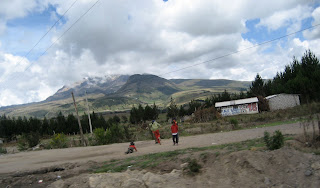 d when they have taken the time to fill in the pot holes with dirt. We don’t give. It is hard not to. Far easier to throw out a few coins because it makes no difference to us and can mean something to them. I don’t want to be part of upsetting the rightful balance of parents providing for their children. The more children collect, the more likely their parents will send them into the street to beg which is a dangerous occupation for a child. This is the country of 21st Century Socialism anyway. We did hand out some fruit which was met with curious stares by most.

We pulled into the Black Sheep Inn which turned out to be a very welcome piece of all that we love about mountain inns back in the States. Low impact cabins (compost toilets!) spread on the hills. Cozy lodge with a wood stove, tons of books, endless coffee and constant cookies and brownies. Adrés and Michele had the dream to open the inn seventeen years ago after the visiting the area. They worked hard to make money in the States for 3 years then returned to buy the land and build the business. Their work really paid off in a sustainable and respectful business in this indigenous mountain community where every detail was taken into consideration.

But the most fantastic thing about the Inn was Sarah – innkeeper, camp director, astute social engineer. She is working at the Black Sheep Inn with her partner Matt for a little while as they embark on their out of States adventure for a few years. There were 36 people staying at the Inn over Christmas and Sarah remembered everybody’s name, what they wanted to do the next day, how they liked their sandwiches and figured out who they might like to sit with for dinner. Her incredible spirit turned this very transient place into a community, even though we were together for only a few hours or days. She explained her secret (aside from her outgoing personality) to us when we asked how she remembers all the names. There is no trick, but she shared a story that helped form this part of her. Even though she is not religious, she was at an Easter sunrise service once when the pastor told how Mary recognized Jesus when he came back from the dead only when he “called her by her name.” She was struck by the power of calling someone by their own name, the special name selected for them by their parents. Now it is part of the way that she really listens to people, calling them by name to signal her respect for them as an individual. 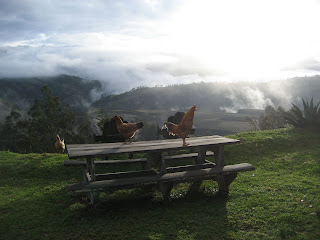 So I am trying to be more like Sarah. Of course it is hard for me to really listen over the roar of my own thoughts and anxieties when I meet someone for the first time, but I will try.

The boys were thrilled that the strictly vegetarian menu was suspended for the night due to Christmas and we were having turkey and gravy.

View outside our room at 7 am.