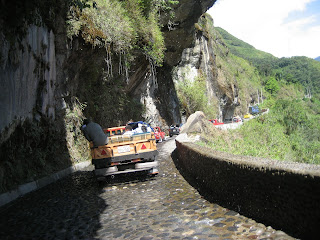 Lots of traffic out of Baños because they are putting lights in the really long and dark tunnels and we have to be detoured one lane of traffic at a time on the old road which is now a bike path. We aren’t worried though because Jonathan asked the guy stopped in front of us while we were waiting what the road to from Puyo to Macas was like. He said it was new and paved and really fast. Turns out he was RIGHT!

The paramo had given way to trees and water falls and as we wound around the mountains to Puyo we were the only ones on the road, except for the occasional bus or truck full of coke bottles. Huge purple orchids grew by the road and the trees were fu 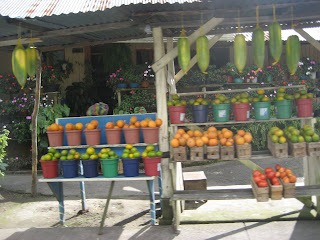 ll of bromeliads. As we got closer to Puyo, leaves got bigger and greener and it was altogether more humid and tropical.

Unfortunately, I now had the virus that had been going around the family and in my feverish state I became obsessed with the intricately knit fuchsia shawls the girls in the last mountain valley were wearing and I deeply regretted not having bought the hand spun yarn in Chugchilan simply because it wasn’t alpaca. It seemed a grave injustice that I was knitting gray wool in this environment. Each valley in the Highlands had a different type of dress. Some skirts were long – a single piece of velvet wrapped around and secured with a hand woven belt. Other skirts were knee length and pleated. Some wore blouses that were intricately embroidered and others factory made sweaters. Woven shawls were popular some places and hand knit in others. Sage green, deep teal, fuchsia and mustard were the dominant colors. Hats were worn by all women and ranged from a perky alpine version to a more rounded sailor type made out of felted wool. Almost all women in the mountains wore this traditional dress, even when they were working in the fields in the pouring rain.

After Puyo, the road, scenery and people changed dramatically. We were heading into the Amazonia on a brand new asphalt road that carried us in a straight line to Macas. Banana groves and sugar cane lined the road. It was hot and people were wearing shorts and t-shirts walking down the highway like it 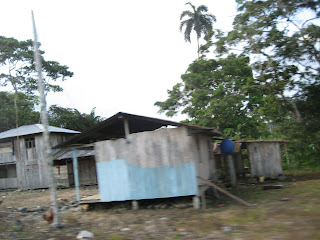 was a path. Which is was to them, but not to us. We saw lots of new government built houses. They were all the same cement and tin roof model built right beside the more traditional wooden houses of that area. Later someone told us that the people still sleep in the wooden houses because they are afraid that the cement ones will fall down on them when they are sleeping and crush them.

Macas as a town has nothing to recommend it and our hotel, described in the guide book as clean and modern was anything but. The power was out when we arrived and we walked up three flights of stairs to our dark and mildewed rooms. We opened all the windows to let in as much dwindling li 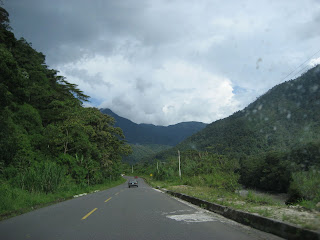 ght and air as possible. When the lights came back on around 7:00 the room was even more disheartening because you could see all of the dark smears and unidentifiable crushed insects on the walls.

We met our Shuar guide, Tsunki, at a desolate sports bar and pizza place for dinner. He bought his son, also Tsunki, and wife and sister-in-law with him. Now, we had researched some fancy jungle echo lodges for this trip, but we had decided that rather than doing a packaged excursion to see the tourist version of the Amazon, we should go directly and make sure that all of our money went right into the community. It momentarily slipped our minds that we are a middle-aged North American couple with two exceedingly bourgeois teenagers that have been living in the lap of luxury for the last six months. We just thought it would be real.

Tsunki explained the trip in – we would take a taxi to a village and then hike about an hour to a small community. Did we have back packs? Well no, but we had two bags we could carry on our backs so we could repack. There are a lot of snakes he said, do you have rubber boots? Well, no. That’s okay, he said, we will find some. We pointed out that Jules wears a size 15 shoe and 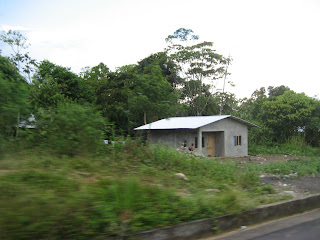 he admitted that would not be possible to find. Do we need bed clothes, I asked, because we don’t have sleeping bags. Don’t worry, he said, we’ll have something for you. The beds are bamboo and we have mosquito nets. We would be staying with his father-in-law the Shaman for one night and then heading back. But we booked two nights, we said. Tsunki was under the impression that it was two days and one night, but he assured us we could stay longer if we wanted. Oh no, we said, one night will be fine.

He told us more about the snakes and the river explained in great detail a series of murders that had been taking place recently in the community. It seems that over the last 5 years, 12 Shuar women have been molested, killed and decapitated. Some in the community blame the influx of tourists into their isolated villages for bringing the murderer. We got ready to retire to our hotel for the night and he asked us if we might possible be able to pay the rest of the money we owed him for the trip now, because he had a few more things he had to buy to get ready. We did.

Back in the hotel, at least there was hot water. We repacked all of the clothes we needed into two bags and organized to leave the rest of our things under the care of the hotel while we were gone. I still felt ill and just wanted to crawl into my none too clean bed, but it was covered with everyone’s stuff and tensions were quite high. We finally got organized and the kids went to their stinky room. Right before going to bed, Jules found a baby scorpion on his bedspread. We checked all the beds and fell into exhausted but fitful sleep.