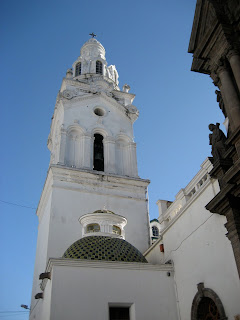 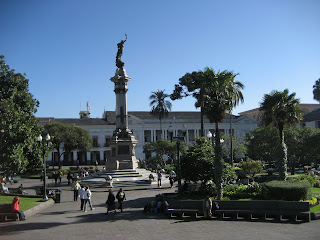 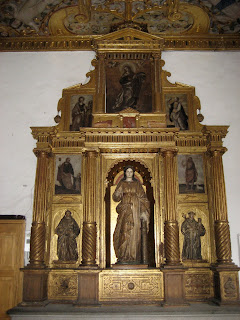 We spent all day walking around the beautiful colonial city. Quito sprawls across a whole valley, but the old center is concentrated at the bottom of a few steep hills. Green mountains backdrop impressive squares and churches. There are restaurants and cafes and museums. We circulate through a few lavishly gold plated churches full of mostly indigenous worshipers wearing pleated skirts, knee socks and alpine hats.

Visit a couple of museums featuring the Quiteño school of painting – Christian themes that I am afraid make my children’s eyes glaze over. Lots of white and bloody Christ statues and one of Saint Francis flaying his own back with a barbed wire like whip. The Virgins for the most part don’t seem to have much 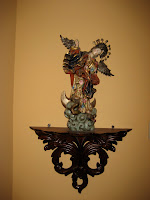 spunk but are pale and dolefully cradling a sickly baby. Only the Conchita had a little life in her. She was pretty in her blue and pink cloak and standing on a dragon. 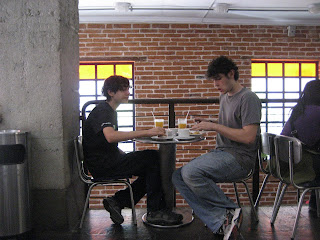 milk or water. If you are lucky the coffee is a strong, freshly made concentrate that you mix yourself with steamed milk or hot water. But often it was instant coffee to mix in.

Fruit was fabulous. Strawberries and blackberries again! And then a ton of bizarre fruit I was totally unfamiliar with. Fruteria Monserrat serves huge bowls of fruit with ice cream, yoghurt or whipped cream. 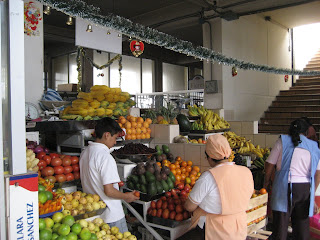 The city market was a sparkling expanse of white tile with a separate section for fruit, meat, flowers, prepared food. The ven 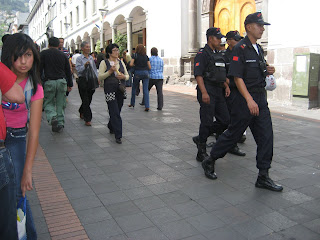 dors wore aprons and hair covers! I thought for a moment I was in Spain. It was the exact opposite of our muddy, dark and smelly market here in Granada.

There were a lot of shiny black boots on soldiers, guards and police. The place was crawling with uniformed men strolling about in groups of 4 or 5 or riding around on motorcycles.

It is Christmas Eve and there are long lines of Quechuan women and children waiting outside of stores. When they get to the front of the line, they get a ticket and then they can exchange it for a bag of candy and animal crackers and a doll (for a girl) or a truck for a boy. It seems to be the universal Christmas present. As we drove through Ecuador the next two weeks, we saw many boys with their shiny new plastic trucks and girls with new dolls. Some were still munching on their large personal bags of candy. 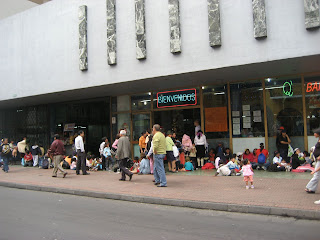 It was getting a little chilly, but it was cozy in Café Modelo. They had bins full of rolls and sweets but I had my new favorite food – humitas – slightly sweet little corn buns steamed in banana leaves. You eat them with coffee. The coffee at Modelo is sitting on the table in a bottle that looks like soy sauce. The waitress brings you a cup or milk or water and then you mix it up yourself. Two guitarists came in wearing suits and played beautiful ballads. No one clapped, but most people gave them money.