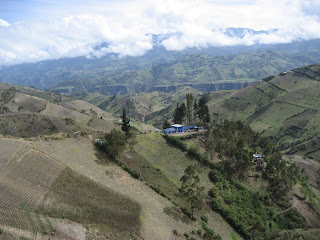 Jules had a slight fever so he was excused from the hike and he relaxed with the chickens and sheep while Jonathan, Noah and I hiked up the mountain, along the ridge and down the other side a bit to the cloud forest with our guide Rodrigo. The sheep, black o 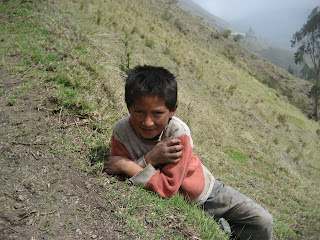 f course, are grazing on these really steep and rocky slopes. One back foot is tied with a rope with the other end attached to a peg driven into the ground. Don’t they ever fall? I asked. Rodrigo said, yeah, sometimes when it rains a lot. I pictured them hanging off the cliff, saved by the rope on their back leg while the rain pelts their fluffy fros into mats.

We walked up past the fields. Everyone in this area has family fields that are not necessarily right by th 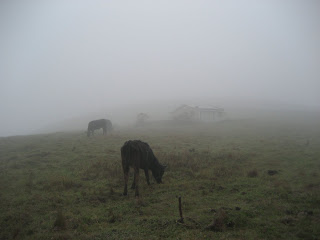 eir house, but close enough to work on everyd 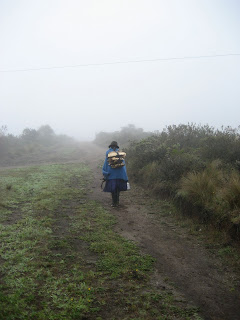 ay. The fields are divided up amongst the children in the family and they have really big families. Rodrigo said it isn’t such a problem because so many leave to go work in a bigger town or city. He is still in high school but finishing up in a year and then he too will go to the city. He attended the bilingual (Quechua/Spanish it is the blue building in the picture) school for most of his education, but switched to a Spanish speaking high school so that he could also learn English. 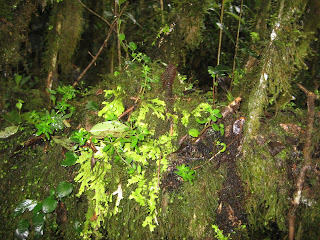 We were winded walking up the mountain. Black Sheep Inn is at 10,500 ft. Along the way, we bought our ticket from a small boy whose family owns the cloud forest reserve. The money they make from tourists is enough that they don’t need to cut the tree 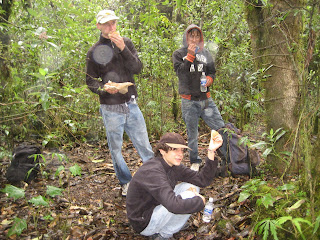 s for income. We passed flocks of sheep and lots of fields. One small girl was holding a brand new lamb that she showed us as we walked by. We were in the clouds on top of ridge and sheep and cows and llamas appeared suddenly out of the mist. We met an old woman walking very slowly with a load of firewood on her back.

It started to rain, but when we entered the cloud forest the leaves protected us from the big drops and we were just in the mist of the clouds and the rain from the trees. It was a million shades of green and the trees were covered in moss. It reminded me of nothing more than a walk in a Northwest forest. Rodrigo showed us many important plants with very specific uses. One was used to give 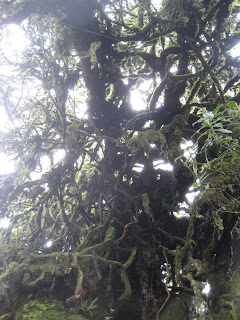 vicious dogs a bath so that they calmed down. Another was good for your hair. Maybe it was the same plant.

We walked back by the road and met a friend of Rodrigo’s who was leading a mare and her shaggy haired colt back down the mountain. The colt was 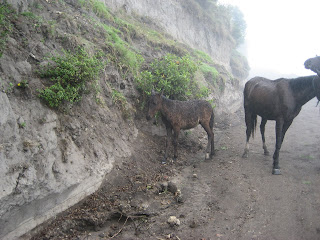 afraid of us; he kept spooking and running away.

Jules was feeling better when we got back and I had a really good massage from Irina, a Russian woman who has been living in London or traveling the world for the last many years. She also teaches yoga, reads tarot and does natural healing. She was only 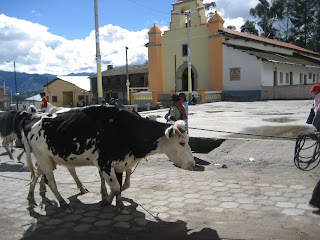 Over at the lodge we met Susan and her daughters, Eve and Katie, a lovely New York family with whom we had what was agreed by all to be the best evening of the trip. Although Eve and Katie are much more grown up than our boys –Katie is a teacher finishing up her masters and teaching ESL in the Bronx and Eve is in college – Jules and Noah were so happy to talk to them. Susan and I bonded on knitting and other important things in life. By the end of the evening, we were planning a yarn hunt and lake hike for the next day. Unfortunately, Katie was coming down with acute bronchitis and had to go back to Quito to the hospital, but not until we had scoured Chugchilan for the elusive alpaca yarn Sarah told us was for sale there. We said our good byes and promised to visit the next time (June) we are in New York. Katie got good treatment and antibiotics, headed to the beach and is much better now. 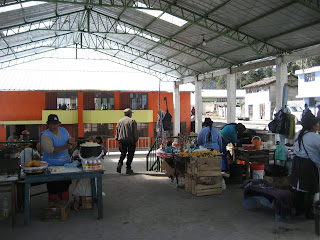 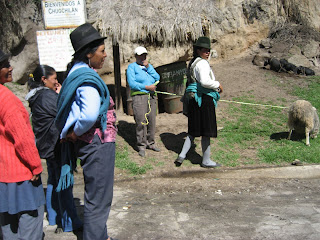