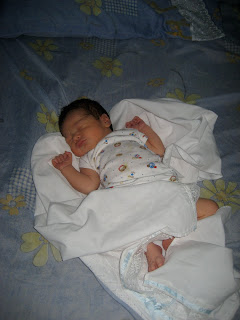 Tuesday morning Moni our cook arrived at the door with food to cook for 10 people and several large melons. Since she is in her last few weeks of pregnancy, she took a taxi. I asked her as I have every morning recently, how are you feeling. Are you having any contractions, yet? She said, no, I feel a little funny, but I have an appointment with the doctor at noon, so I’ll just go right there from here. I’ll go now with you in the taxi. No, no she said I’m fine. Later. OK I said.

It was a typically hectic morning and I was working on a tight deadline. I had 4 guests who were completely self-sufficient, but still needed some direction and reassurance once in a while. I was trying to make sure Fabiola and Jorge were signed up and outfitted for school. The needy, inexperienced substitute maid (who is here because Christina is on maternity leave) kept interrupting me to ask basic housekeeping questions, give me gardening advice or relate some random family tragedy or past employer injustice. Plus several fruit sellers, shoe shine boys and plant salesmen standing at the door who wouldn’t take no for an answer easily. Just to say I wasn’t really paying that much attention to Moni that morning. She marinated our beef for dinner, made a beautiful salad for our lunch and cleaned up the kitchen.

Then she said – I’m leaving now. Wait a minute, I said, I’ll give you money for the doctor and you can prepay for the delivery. Moni had been planning on having her baby at the public hospital, but I was getting increasingly uneasy about it, so a few weeks ago I went over to the Private hospital to see how much it would cost to have the baby there. They had several packages to choose from which ranged from US $ 280 for a normal delivery and stay in the maternity ward to US $530 for a cesarean, tubal ligation and private room. $320 gets you a the basic package with a private room for your night in the hospital. Tell them we will pay for the cesarean package if you need it I said as I thrust 16 twenty dollar bills in her hand – about twice her monthly salary.

I wasn’t that surprised when she didn’t show up for dinner, but I was worried that perhaps she needed the cesarean and they wouldn’t do it because she didn’t have the money in hand. All other kinds of irrational fears kept going through my head. Jonathan called her aunt, the only phone number we have for her, and tried not to sound like he was wondering if Moni was planning on coming over to fix our dinner. The baby was already born! A boy! Everyone was doing fine.

Big relief. We still didn’t have time to make dinner even though Moni had done almost all the work. We went out for pizza.

The next morning I went to see Moni and the baby in the hospital before they checked out. The Hospital Privada Colcibolco had always terrified me a bit because I remember seeing it the 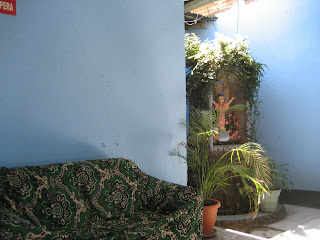 very first day I came to Granada. It is a low cinderblock building like any other along the highway from Managua. Its fluorescent lights illuminated the tired couches in the waiting room and I just thought, please don’t let me ever have to go to that hospital. But everybody here is pretty happy with it. I walked in past the statue of the Diviño Niño in his little pink dress and said I was here to see Moni, which room is she in. Just go over to the hospital area and ask the nurse they said. The hospital section was a big room with a pharmacy at one end and a nurses station at the other. Several wooden doors opened off each side. It had the same red and gray cement tiles as my house and half the other houses in Granada. There was a gurney but no sign of any other equipment. I stood outside the second door and called Moni? Her mom got up to let me in.

The room was like an ordinary bedroom with a single bed – it did move up and down, a beaten up bedside table and a cane rocking chair. There was none of the sterile environment (it was very clea 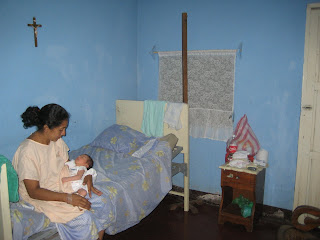 n though) monitoring equipment and other things that are in the most ordinary hospital rooms in the United States. Moni shared a bathroom with the lady next door.

Moni was pretty perky for someone who had just given birth and Santos Daniel, her baby, was strong. They both had slight fevers from kidney infections, but antibiotic shots were administered to both and they went home with a whole bunch of medicine. The pediatrician came by to check the baby out and then we were just waiting for Moni’s doctor to come give her the ok to go home. The baby was big – nine pounds – and was born FORTY MINUTES after Moni arrived at the hospital. Now with her bouncing baby at her breast and everything safe behind her, she admitted she had been in labor since midnight, but wanted to finish work before going to the hospital. This was her third baby; she knew they came fast.

All’s well that ends well, but I had no idea how close we were to having a baby born in our kitchen. I asked Moni if I could take some pictures of her and the room because my friends in the United States would want to see what a hospital looks like here. She said she had seen TV shows where they showed birth in the United States and there were always a lot of people around. Is it really like that she asked. Yes it is, I said. Not here, it’s very simple and quiet, she replied.