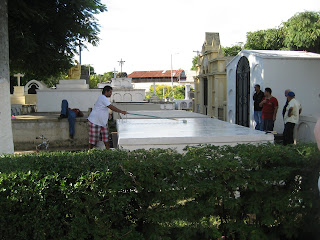 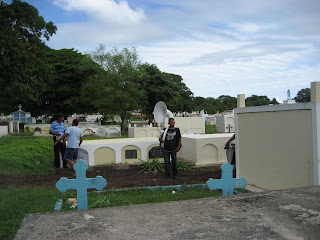 There were a lot of Halloween parties in 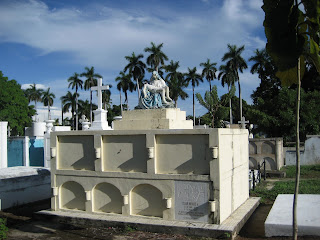 Granada, but the big observance was for Dia de los Difuntos. I tagged along with Lucia and Fabiola as they visited the graves of their relatives in the beautiful old cemetery on the outskirts of Granada. Mombacho rises up behind the tombs of the dead that are much fancier than the houses in the area directly adjoining the cemetery. There are presidents and famous writers and lots of the old families of Granada. Once you get past the big mausoleums, the structures are simple, mostly just one level with space for 4 people. Out in the way back, there are just mounds of dirt with wooden crosses. 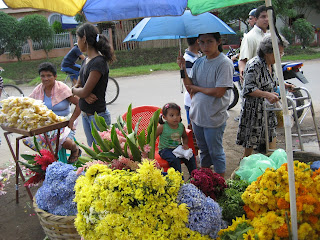 The street leading to the cemetery was mo 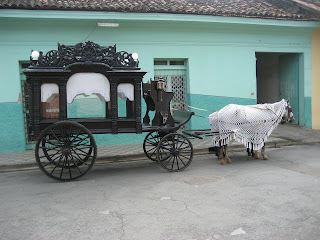 re crowded than usual and we walked behind a group swinging rakes and machetes to use to make a little money cleaning grave sites. Flower sellers were fanned out along the whole front, usually there is just one woman with a basket on her head. Since they were mostly so aggressive, I bought some bouquets from the 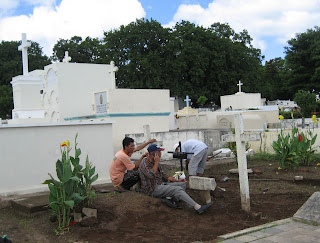 most timid vendor I could find. She probably had to give all her money to her mom.

There were a couple funerals that day and the chapel was full with a family saying good bye to a loved one. The Jesus was hanging on his cross outside the chapel with a little box for donations. Later, he will be carried in a procession throughout the roads of the cemetery. Families were gathered by their dearly deceased, engaged in the mundane work of cleaning, paining and decorating the tombs and graves. 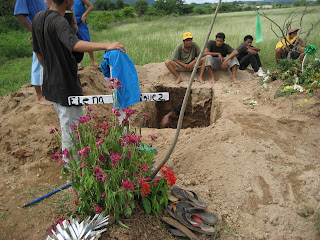 Lucia went to meet her mother-in-law at her father-in-laws grave. They reminisced and filled me in on the activities of Omar’s 8 siblings. His sister artfully arranged the flowers while the grand kids ran around the 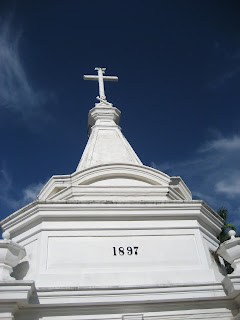 grave. The family discussed further gravesite acquisition. There are only two spots left and they belong to an aunt. Just Omar’s family would need a lot more room and Lucia’s family has 9 children in her generation, too. They really need two more large plots with multistory tombs. But the jewelry business isn’t really doing well enough to get the $150 necessary.

We went on to visit the grave of Lucia’s Tia and Tio who died within one week of each other about a month ago. They had lost their beloved son a few months earlier and it was just too much to bear. Although they didn’t have a family plot, their graves are close together because they died around the same time. A new grave was being dug right next to the Tios and the gravediggers had hung their shirts on the cross and left their shoes and water bottles in the fresh mound of the grave. The band was playi 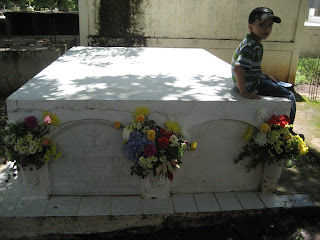 ng for the family of the newly deceased and the diggers enjoyed the music. 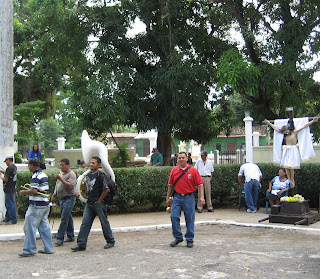 We went on to look for the graves of Lucia’s grandmother; her dad’s mom. Her maternal grandmother just celebrated her 99th birthday. After that, we tried to find the grave of her nephews’ grandmother. Because all of her children are working in Costa Rica, there was no one to tend her grave and we wanted to leave our last flowers. Fabiola walked slowly reading all the names, but we couldn’t find her. We walked back home. It was really hot so we had to stop for a drink along the way.