I look forward to this sandwich all ye 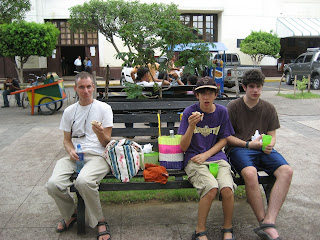 ar. The day after Thanksgiving, I along with most other folks in the US, always have a turkey sandwich for lunch. Roasted turkey, stuffing baked in the bird, cranberry sauce on whole wheat bread. Sometimes, there isn’t enough stuffing left and the sandwich is just not as satisfying without it. You can of course buy a turkey sandwich with the Thanksgiving trimmings any day of the year in Seattle at Bakeman’s. It is not the same.

We had plenty of leftovers from our impromptu Thanksgiving feast. I sent a lot home with Moni, but I was careful to save enough for the sandwiches. I made us each a fat sandwich to eat on the way to the beach. Leon, founded the same year as Granada and her rival in politics and colonial architecture, was on the way. We drove to the central square and parked in front of the p 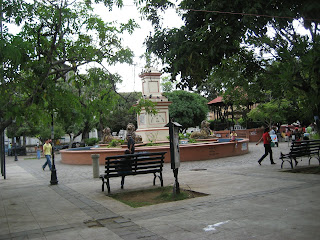 olice station. We found a bench among the snow cone and hot dog carts and had our picnic overlooking the lion fountain in front of the basilica.