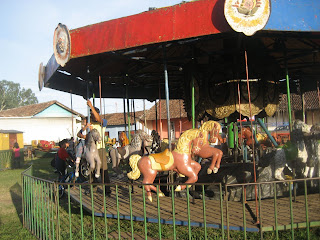 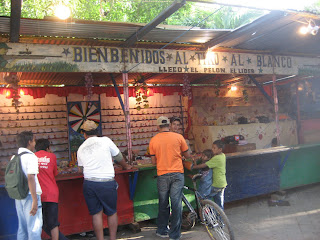 Walking through the streets to the bank this morning I went through the square where they are setting up for the carnival today. Lots of old timey carnival games. Also at the lake over the past two weeks the carnies have been slowly setting up. They build their houses out of used tin and timbers. It looks ancient but only just showed up. The rides look like they are from the 1930’s. They very likely are. 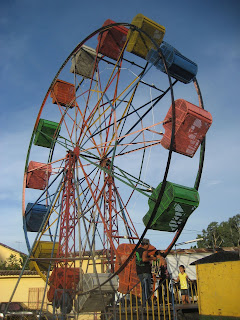 I wanted to be sure that I didn’t miss Carnaval so I headed out at 4:45 pm to look for it. It was supposed to start at 4:00. I walked along the parade route all the way to the Polvoro where it was supposed to start. People were settled down on the sidewalk in chairs or sitting on stoops the whole way, just waiting. I saw Cristina and her sisters who had com 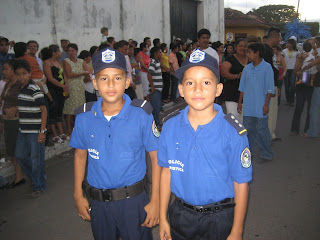 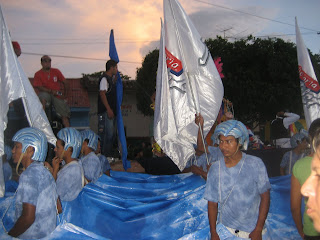 e into town for the weekend. Carina and Elton, her kids were already bored and restless. It was about 5:30.

At the Polvera, floats were waiting to begin. Victoria Frost (a new ice beer from the Pellas monopoly) was sponsoring the event, so there was a wintery theme to the parade. Except for the hundreds and hundreds of girls and boys dressed in Rio style samba outfits. I saw the Carnaval Queen leave the bus accompanied by her mom. she came on wearing little more than a bikini and glitter powder.

A band of clowns was juggling and making animals out of balloons for the crowd. Lots of beer was sold. The bomberos were in the front with their new bombero boat. I took a picture of two kids wearing Policia National uniforms. I waited. I leaned against a wall. I walked up and down. I sat on a stoop. When the bomberos took off, I surged to the front of the crowd by Maria Auxiladora. But the rest of the parade didn’t take off. My feet hurt. At 6:15 I went home for Shabbat dinner and then Jonathan and I went to the airport to pick up Cyn and Melanie.

By the time we got back and got them settled, it was 10 and we went out to Calzada to see what was going on. The parade was just ending. The dancers were still salsaing their hearts out when the bands played, but they looked a little tired 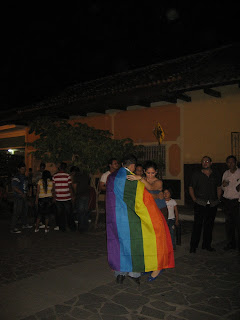 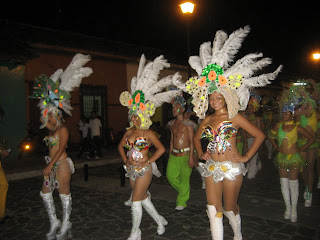