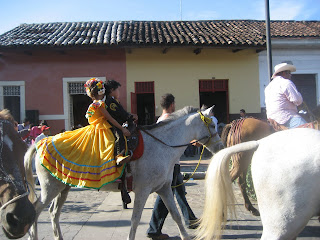 People have been talking about the Hipica since we got here. Granada’s horse parade is one of the best in the country and is the culmination of the festivities around the Ascension of Mary day. Our house is two blocks from the parade route and things got started early, although not the parade of course. Our neighbor across the street who owns the Pulperia had a big awning delivered and set up chairs and tables under it. The barbecue was going early and there were c 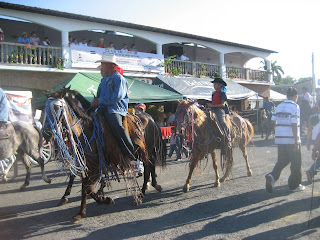 oolers of cold beer. People were starting to p 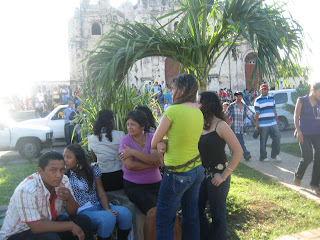 ark in our street. We decided to beat the heat and crowd for a while and headed out to Laguna de Apoyo with Melanie and Cyn to swim.

When we got back, traffic was not really moving into town. It was pretty much a standstill with LOTS of people on horses and LOTS of cars from Managua and elsewhere driv 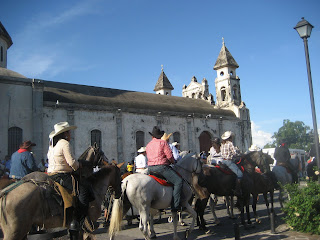 ing in. Roads were (very effectively) blocked off by huge piles of sand, so we couldn’t circumvent the detour. Crawled for a while. Finally, Melanie and I got out and walked up to the next street to see if people were actually being allowed to cross. There was a police officer sort of directing traffic. When a group of riders went by, a few cars would make their way across the road. Finally we got back to our neighborhood weaving around out of towners, pedestrians and lots of people on horses. Our street was fully parked up and many people were eating at the pulperia.

We walked down to the parade route and watched the parade. We missed the organized part, if there was one, and n 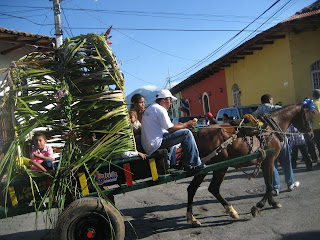 ow it was just an endless stream of horse riders. Little girls wearing traditional dresses, cowboys whose horses did fancy steps and LOTS of drunks 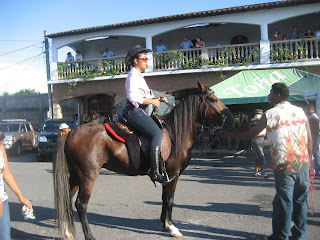 on horses galloping through the crowd. Many stores had the gigantic rented speakers and were blaring music. The dancing horses would prance by to the beat.

There were supposedly many pick pockets in the crowd, but we took nothing with us, having been forwarned. There were venders everywhere, lots of cold beer, nacatamales, hot dogs, candy apples, risquillos, plantain chips, ice cream, vigarones,

We watched for a while and then retreated home for a swim. Our neighbors had a band with a marimba at their stand and people were dancing. We heard horses going up and down our street long into the night. The next day, all the cars left and it was quiet again, but there was trash everywhere. 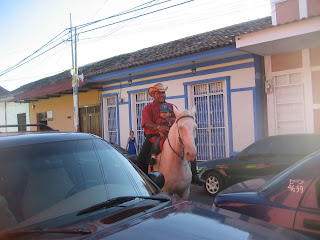