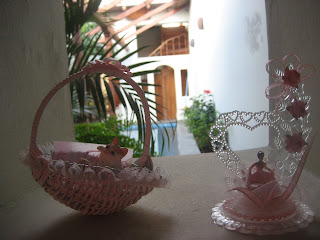 We decided to walk because we felt uncomfortable pulling up in the big white SUV at Riccardo’s house. We set off, but weren’t exactly sure where it was. Jonathan had been there only once. We ended up lost in a part of town very near the house that we didn’t even know was there. People were poor, dirt streets, tiny houses, fewer and fewer women out walking. Several nicely renovated houses by the Spanish government. We thought we were heading back out of the barrio, but the road was turning ever so slightly and we would come against a cement wall. We asked several people where Riccardo’s house was, but no one knew them. We were warned about the drug dealers several times. We were dressed up and carrying a present. We found our way out and decide to go home, we almost bail at this point because it seems overwhelming. But we get the car and try once more. There it is not very far from our house. Jonathan didn't recognize the lane because there was a circus in the empty lot now. Still feel embarrassed about the car.

Nubia comes running out to greet us. Yelbita looks exactly like a Barbie doll in a hot pink strapless dress and long, long curly black hair and spiky sandals. Their house like one in India, bare cement room cleared out for the party, two tables, rented plastic chairs arranged around the wall and the door way framed by a pink balloon arch. We meet a lot of Riccardo's family. Little kids accidently popping their balloons on the barbed wire that separates their house from the street. The only person to come over and talk to us, or to move out of a plastic chair and talk to anybody for that matter is Myra, Riccardo's youngest sister. She tells me about her new baby and her two older boys 3 and 4 who I have already met. She is 21 and incredibly beautiful. She asks if I want to see the new baby. Next door her other sister is nursing a bigger baby and Myra goes and gets her 21 day old baby from a relative. Precious bundle, she lets me hold her. She doesn't have a name yet because they want to pick the right one.

We go next door and the formal festivities start. A preacher reads a verse from the Numbers. They are all Pentacostals, like my relatives, and there is alot of swaying and murmelling prayers. Yelbita is presented to those assembled and everyone takes a picture with her. Miguel tells us about his education. He had to quit school and work because there wasn't enough money, but his sisters stayed until university and has a good job now. He told us about the drug dealers in the neighborhood. There is some tension at the party between the delicuentes and the church folks. Jonathan dumps his food on his lap when he kisses the beautiful Myra good bye. We eat the same cake as every celebration in Granada. Young folks start dancing and a cousin forces me to dance. I stumble along and quickly exit. I feel so uncoordinated. Nubia walks us out holding on to my arm so we won’t get lost. She thinks we disappove of the dancing. I felt like an honored guest, I got to pick my party favor first – little pink cake topper. Jonathan picked a basket of kittens. Our house seemed so huge when we got back. Now I realized why Nubia didn't want to have the party at our house as planned.
Posted by Tamara at 4:25 PM