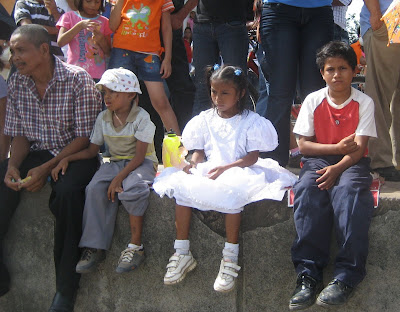 Big excitement in Granada today. It was the Tope de Toros or the running of the bulls. I was at Iglesia Xalteva. People were crowded onto the wide space outside the church that was a few steps off the street. The walls of the park were already full of people who had been there for a while. It was indeed the safest place. I placed myself at the church entrance behind the railing with a bunch of other wimpy ladies. We waited about an hour or more. Every once in a while people would start running down the street and the crowd would surge. Half rushing toward the action and half running away. False alarm. When a bull finally did come, I didn’t notice because there had been so many false alarms. Whole families were sitting in trees. 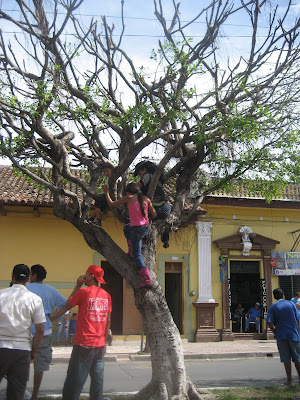 The bulls are loaded into a livestock truck that drives down the route of the bulls and periodically lets one out. There are several national police officers sitting on top of the truck. When they let the bull out, it can go where ever it wants. Sometimes the bulls aren’t very energetic. This year, one actually lay down in the street. There is always about a hundred men and boys running as fast as they can ahead of it and about 20 drunk men taunting and slapping the bull. If the poor bulls aren’t agitated enough, they are tortured by the bull tenders and children who beat them with sticks and whip them with switches. The crowd shrieks with terror and delight when the bull turns, but it pretty much continues down the street. 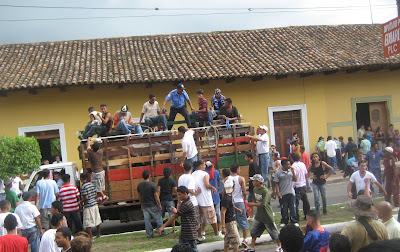 The bomberos (firefighters) and national police are in full force and the ambulances are stationed near by. Everyone I know who lives here said they weren’t going because it was too dangerous. Someone got killed last year. An American who was trying to take a picture of the bull running toward him. But I really wanted to see it, because where else would the city government turn a truck load of bulls loose into crowds of people just out of civic pride and entertainment. It would be like bulls being let loose during Seafair. 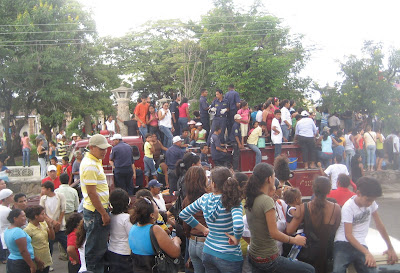 There were lots of vendors selling stuff, but I forgot to bring money. After a couple hours of enjoying the crowd by myself, I carefully selected streets that I thought would not be likely to have drunk or bull traffic and went to the Central Park to meet Jonathan and the boys. They were sitting at a café on the patio of a hotel overlooking the square and they had a good view of the bulls as they ran into the park and were safely up away from the crowd and animals in the street. 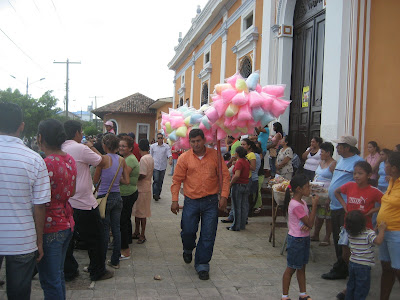 Kids had already gone home, but I stood up on the chairs at the café to see the bulls as they came into the square which was full of people. The truck pulls up and lets a bull out onto the square. The crowd surges and runs and a wave of people come up the steps of the café. There is a bull off his rope and going through the square. He weaves through the soda stands and hot dog vendors and among the horses with their carriages. About 10 youths with tattoos and gelled hair slap the bull and hit it with sticks. Some older drunks wave handkerchiefs and run up and touch the bull. He turns toward where we are sitting in the café and heads right toward us. Of course I know I am safe, but I panic and cower on the table as the girls on the steps squeeze in. There is lots of screaming. The bull turns and heads toward Eurocafe. We’ve had enough, but we have to wait until it is safe to walk home. 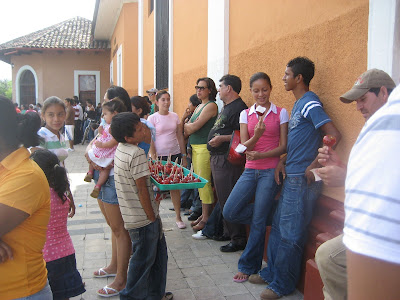 When it seems that the bulls have cleared the square for a moment, we strategically start to walk along the hotel row home. Jonathan keeps me apprised of escape routes should a bull charge us. Every time the crowd comes toward us, I can’t help but run away, which is of course the worst thing to do. As we are going by the Pasos house on the square, the crowd is running ahead of a bull and we stop in the doorway with two maids in blue uniforms. The bull turns toward us, so we jump behind their door with them into the long cool passage to the house. After the bull passes we make our way home through the Plazuela de los Leones going from car to car and behind the statues in case the bulls head this way. They do and I panic and run to climb on top one of the cannons which drives Jonathan nuts. He is definitely more fight than flight. But not with a bull.

Walking back home, everyone is behind their gates watching the street, just in case a bull should wander that way. On our street, several neighbors have their chairs in front and are watching the crowd go by two streets down. We pull our rockers onto our sidewalk and watch. Several people on horse back but no bulls head down our street.

There are no pictures of the bulls because I was too scared to take them.