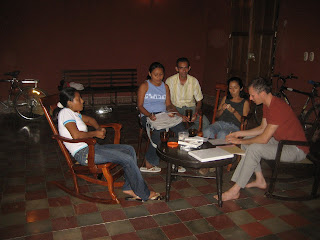 Three weeks ago we gave Lucia money to initiate the pig business and she has been wildly successful. She needed to buy a freezer, some cement to make the floor of the meat processing area, some big hooks and pots and few other things. She got everything together and was able to slaughter her first pigs the same week. She was going to start with one for practice but she ended up buying two small boars.

Lucia, Sylvia, Eugenia, Rudy, Omar and Jose were up all night. First they got everything ready and then at midnight the butcher came to slaughter the two pigs. He is a master butcher who has been doing this work for 30 years, always at night. He cut everything up and the family prepped and packaged and every bit of pork was sold or spoken for by 8 o’clock in the morning. Lucia activated her extensive network of family, friends and neighbors. Omar, Rudy and Jose went off in three different directions to deliver the meat around the city. Sylvia said that often they just cook it when it arrives and everyone eats it for breakfast. Imagine having meat on your breakfast table that was that fresh in a city in the United States.

We were celebrating the success of the first week and Lucia’s birthday at our local Chinese restaurant. We had pork and the Weinstein family even ate a little. Jonathan asked the waiter who buys the meat here and he sent the owner over. Lucia gave her spiel and he promptly ordered thirty pounds of loin for 33 Cords ($1.50). He was disappointed to hear that she only slaughtered once a week.

So last week Lucia went to the countryside in Masaya to a large pig farm and picked out two large pigs to slaughter. This time they agreed that one person would get to sleep some while everyone else worked through the night. It was Sylvia’s turn to sleep, so she was a little more rested when she showed up for class.

Lucia delivered the pork to Huy in the Chinese Restaurant and he was pleased with the quality. Lucia was delivering ribs on the bicycle, sitting side saddle while Omar pedaled with a red plastic pail on the handle bars. She set the pail on our floor and pulled the glistening ribs up with bare hands, running them through her fingers like they were piles of gold. She looked really chic in her pedal pushers and tank top. Then she put the top on the pail and headed out. She chews on her nails while we are discussing potential customers.

Each week, they keep a little bit of the pork to make nacatamales and sell them on the weekends. They sell them mainly to their family and neighbors. These three weeks they have sold every single part of the pig and eaten none of it themselves without paying for it. They want to make sure the profits go back into the business and are concerned about paying us back.

This week there was a problem with the nacatamales. The woman who made them did something wrong and most of them were bad. Fortunately, a family member discovered the problem before they were sold, but they had to be thrown out (fed to the pigs I am sure). They lost some of their profit this week, but we are waiting to settle the books for the week with them. The last two weeks, they made enough to buy the next pigs, but they need to do some further calculating to see if this business can really sustain the family.