What I saw today 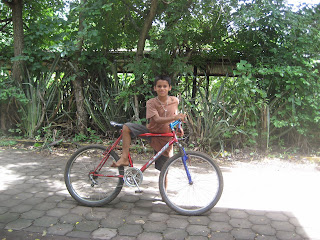 This little boy was riding this bike around the restaurant where the Puedo Leer teacher training was being held. I walked out to the road to look at Mombacho and he held up one finger and said do you have a peso? No I said, but I'll take your picture and you can look at it. He liked the picture and then he said as I was walking away, Do you have fifty dollars?

I saw a beautiful cow tied to a tree next to the teacher's house with pigs in the yard. 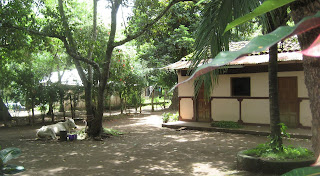 I saw 3 different funeral processions, one was almost to the cemetery and had the big glass covered carriage with white lace curtains and lots of people walking behind. The other was almost ready to leave the house. They had the more simple cart without the glass, but still very beautifully carved. The body hadn't been put on it yet. The other procession was making its way to the cemetery from the church. All of these had many family members. Carol said, she once saw a carriage that only had two people following it, a little boy and a man. 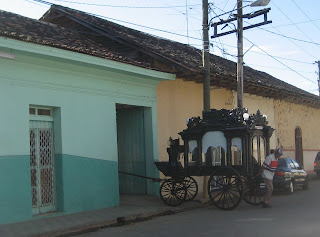 One of the fancy carriages is kept across the street from us in the coffin shop. I like to look in there at night at the coffins they are working on and the chairs all stacked against the wall waiting to be rented. After the chickens and the bells, the next sound I usually hear in the morning is the whir and whine of the saw in the coffin workshop.

I saw a grade school band marching down the street and blocking traffic in front of the post office for about 20 minutes. The pom-pom girls were about 6 and wearing their school uniforms, going through their formations at the sound of the teacher's whistle. The older girls were dancing with those sticks, but they had changed into their jeans. I've heard there is going to be another parade September 7.
Posted by Tamara at 7:07 PM